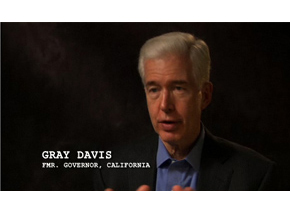 The word "gerrymander" (originally written Gerry-mander) was used for the first time, we’re told, in the Boston Gazette in 1812. The word was created in reaction to a redrawing of Massachusetts state senate election districts by then-Gov. Elbridge Gerry. When mapped, one of the more contorted districts in the Boston area was said to resemble the shape of a salamander.

So the history of pretzel- and lizard-shaped political districts in the U.S. is a long one, and the critically acclaimed documentary “Gerrymandering” (2010) tells the whole story. With two bills on the California mid-term ballot bringing this issue to voters, the UCLA Film & Television Archive decided the time was right to include Jeff Reicherts’ film in its Archive Documentary Spotlight series at the Billy Wilder Theater in Westwood. The screening was followed by a Q&A panel discussion about the political issues raised in the film.

The film explores the practice of redrawing of electoral boundaries in order to influence elections. Reichert includes discussions of the toxicity of the practice by luminaries of contemporary American politics, including California Gov. Arnold Schwarzenegger, former California Govs. Gray Davis and Pete Wilson, and others.