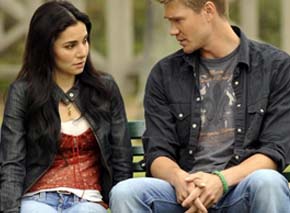 A new film by TFT alumna Patricia Cardoso (“Real Women Have Curves”), “Lies in Plain Sight,” has been picked up by the Lifetime Movie Network. The film had its world premiere on the cable channel on Oct. 3 and will continue in rotation though November.

"Lies in Plain Sight" tells the story of Eva and her blind cousin Sofia (Martha Higareda), who were inseparable as children, with Eva the loyal companion who helped Sofia through her tough adolescent years. When Eva suddenly commits suicide, Sofia rushes home to her father, Hector (Benito Martinez), and Eva's parents, Marisol (Rosie Perez) and Rafael (Yul Vásquez), to find answers.

But the more she delves into Eva's life, questioning her past boyfriends Ethan (Chad Michael Murray) and Christian (Christoph Sanders), the more Sofia realizes that their childhood was actually filled with dark, disturbing secrets.

“Lies in Plain Sight” is based on the acclaimed Israeli feature film “Out of Sight,” written by Noa Greenberg.

“Real Women Have Curves” was recently selected as a feature presentation of the first Athena Film Festival.