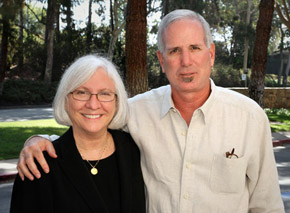 Book-ended by two electrifying production numbers from the 2010 Ray Bolger Musical Theater production of "Cabaret," “Willkommen” and “Money, Money, Money,” this year's orientation program in the Freud Playhouse celebrated in grand style the arrival on campus of the School’s new and returning students for the 2010-2011 academic year.

Attractions included a stirring statement of a vision for the future from Dean Teri Schwartz, and a mixture of enduring creative enthusiasm and wry practical wisdom from alumnus Joel Surnow '76, one of television’s most successful writer-producers.

In her address, Schwartz emphasized the central themes animating her strategic plan for carrying the School forward into the 21st century, a vision that embraces humanistic storytelling, global diversity, cutting-edge research and an interdisciplinary approach that breaks down barriers between programs. This approach is founded, she said, on a shared passion for the uplifting power of great storytelling. 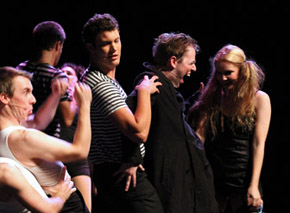 “Serving as our anchor,” Schwartz said, “is great classical storytelling, the universal voice that binds us all together as humankind. These are the deep waters that run under everything we do here at TFT. That’s why we say we have to be both radically ancient and radically modern, where we draw upon the past to invent the future. We are the place where the human story is told.”

The dean offered a memorable rallying cry for the School’s unifying approach: “No more silos, no more boundaries, no more barriers.”

Listen to a complete podcast of Dean Schwartz's address to the students:

Introduced by MC Rich Rose, TFT professor and associate dean, and preceded by a barrage of high-octane clips from his signature series, “24,” Guest of Honor Joel Surnow offered students a bracingly useful form of encouragement. Being aware how hard it is to achieve success in the entertainment business can actually make the struggle easier, he said: “If you tell yourself that you have to succeed right away, every day becomes a grind. If it's, ‘I have another four years of schooling [to get through] in the real world,’ then it ceases to be so onerous.”

Barbara Boyle, chair of the Department of Film, Television and Digital Media, introduced two outstanding recent films by TFT students, Dawn Garcia's live action “Pals” and Alexis Block's animated “Toppers,” worthy examples of the high standards current students have set for newcomers. Boyle waxed philosophical in her remarks, offering a string of startling statistics to demonstrate how enormously life in the U.S. had changed just over the last 100 years.

Professor Michael Hackett, chair of TFT's Department of Theater, referred back to Dean Schwartz's emphasis on the cross-pollinating interdisciplinary approach of a School that teaches Theater, Film, Television and Digital Media under a single academic umbrella. He urged students to make bold choices and to pursue excellence no matter where their passion takes them, whether it’s writing the best sitcom the world has ever seen or making "freaky theater in the middle of the woods in Poland.”

Listen to a complete podcast of Professor Hackett's address:

Hackett also introduced the second of two “Cabaret” production numbers, which ended the festivities with a burst of energy. Like the films introduced by Boyle, it served as a practical example of the excellence TFT stands for, the high mark the School’s students are challenged to shoot for.