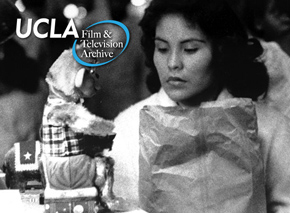 The Archive on TCM: 24-Hour Marathon of Restored Classics

Turner Classic Movies (TCM) and the UCLA Film & Television Archive joined forces in September on a 24-hour showcase of the extraordinary restoration and remastering work conducted by the Archive. Hosted in part by TCM’s Robert Osborne and Jan-Christopher Horak, director of the UCLA Film & Television Archive, the marathon premiered Sept. 20 and featured several new transfers and recent restorations, including “Topper" (1937), "Way Out West" (1938), "The Secret Beyond the Door"(1948), "The Prowler" (1951) and "Shadows" (1960).

“Turner Classic Movies is proud to be able to present the work of the UCLA Film & Television Archive, one of the most respected centers for cinematic restoration in the world," said Charles Tabesh, senior vice president of programming for TCM. "TCM is committed not only to introducing classic film to new generations but also to supporting the preservation of the world's cinematic heritage for future generations."

"In keeping with UCLA Film & Television Archive's efforts to preserve the rich history of cinema, we are honored by this opportunity to collaborate with Turner Classic Movies in presenting our work to such a diverse cable television audience," said Archive Director Horak.

Thirteen films were screened during this 24-hour celebration of the UCLA Film & Television Archive's preservation efforts on Sept. 20, including: ""The Exiles" (1961), an outstanding early independent film that follows a day in the life of a group of Native Americans living in Los Angeles; "My Darling Clementine" (1946), John Ford's brilliant retelling of the famed gunfight at the OK Corral; "Way Out West" (1938), a Laurel and Hardy Western featuring a famed soft-shoe dance number; and "The Red Shoes" (1948), Michael Powell and Emeric Pressburger's colorful ballet fantasy about a young ballerina torn between two men.