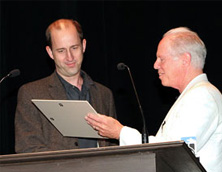 Screenwriter Nicholas Griffin '89, best known as the co-writer, with his brother Ted Griffin, of the Ridley Scott/Nicolas Cage comedy "Matchstick Men," has been selected as the Lew and Pamela Hunter/Jonathan and Janice Zakin Chair Holder in Screenwriting for the 2010-2011 academic year.

Griffin was born in Pasadena. While a student at TFT, he received the Dorothy Arzner Award for undergraduate filmmaking.

Shortly after graduation, he landed his first industry job as production assistant for Stephen J. Cannell Studios, working on such television shows as “The A-Team” and “Hunter.”

Griffin co-wrote and produced “Primary Colors,” a children’s musical album released by Rhino Records in 1993, featuring artists from groups such as The Beastie Boys, X and The Red Hot Chili Peppers.

The Lew and Pamela Hunter/Jonathan and Janice Zakin Chair in Screenwriting was established in 1999 by San Francisco businessman Jonathan N. Zakin with a gift of more than $500,000 to the UCLA School of Theater, Film and Television.

Lew Hunter is an emeritus professor in the prestigious writing program. Jonathan Zakin, a screenwriter, has studied at UCLA and is a member of the School's Executive Board.

The Chair Holder was announced by Professor Hal Ackerman at the annual Screenwriters Showcase during the UCLA Festival of New Creative Work in June. The distinguished writer teaches a 10-week advanced screenwriting seminar on campus the following academic year.