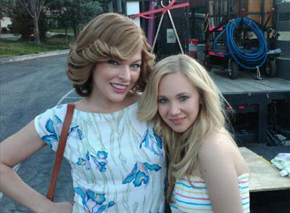 UPDATE: 09/27/10: “Variety” reports that North American rights to “Girlfriend,” written and directed by Justin Lerner MFA ’07, have been acquired by Hanover House. “A release is planned by the end of the year,” the trade paper says.

UPDATE: 09/17/10: IndieWIRE offers a rave review and a four-part interview with Oscar-winning alumnus Alex Gibney (“Taxi to the Dark Side”) as his latest feature, “Client 9: The Rise and Fall of Elliot Spitzer” screens at the Toronto International Film Festival.

Alex Gibney's mesmerizing “Client 9: The Rise and Fall of Eliot Spitzer” reveals such a likable and reflective Eliot Spitzer that it might well be part of "the rise and fall and rise" of Spitzer. We're reminded of how effective he was as New York State's Attorney General, especially in prosecuting Wall Street financial malfeasance, before he became New York's 54th governor and ran afoul both of its old-crony Albany politics and his own political and sexual hubris. Fun fact: he seems to have spent only one fateful encounter with Ashley Dupre, who used the scandal to further her own career. Gibney uncovered an "escort" who spent much more time with Spitzer, interviewed her extensively, and hired an actress to deliver those lines. Spitzer has returned to public life with speaking engagements and appearances on television, and CNN has announced that he'll soon head a new "Crossfire"-like show for them.

Gibney has two other projects due out before the end of the year, a chapter in the multi-director adaptation of the bestseller “Freakonomics” and “My Trip to Al-Qaeda,” an HBO adaptation of Lawrence Wright's one-man play “The Looming Tower."

Here’s the first part of IndieWIRE’s interview with Gibney in Toronto.

UPDATE 09/15/10: “Beautiful Boy,” written by screenwriting alumnus Michael Armbruster MFA ’04, has been picked up for distribution out of Toronto by Anchor Bay. Armbruster co-wrote the film with director Shawn Ku. Maria Bello and Michael Sheen star as the parents of a college student who learn not only that he has been killed in a campus shooting, but that he was the gunman who massacred his fellow students.

UPDATE 09/15/10: Down syndrome star of alum Justin Lerner’s “Girlfriend” the toast of Toronto

Steve Pond, reporting from the Toronto International Film Festival for the entertainment news website The Wrap, describes the fan following that’s developed for the festival’s most unexpected leading man:

Toronto is crawling with the movie stars you'd expect to see here, from Kevin Spacey to Colin Firth to Marion Cotillard. But there's always room in the festival for a genuinely new face, and nobody at TIFF 2010 exhibits that quite as dramatically as Evan Sneider.

Sneider, a 31-year-old actor with Down Syndrome, is the star of “Girlfriend,” the sweet, beguiling and at times wrenching feature debut from writer-director Justin Lerner about a small-town young man who romantically pursues a single mom.

Sunday night, after the first public screening of the film (and, in fact, the first time it had ever been shown on a big screen), Sneider stood in the Scotiabank lobby, signing autographs and graciously accepting congratulations and posing for photos with one fan after another.

It would have been heady stuff for any actor who'd come up in community theater and never before appeared in a feature film, but Sneider took it in stride and rarely appeared dazed by the crush of fans or the unexpected attention.

“I love watching myself onscreen,” Sneider told TheWrap in the theater's green room before the screening. “I want to be in more movies, I want to be on TV, I want to do all kinds of acting.”

In “Girlfriend,” Sneider is the centerpiece of a film that co-stars Shannon Woodward ("The Riches"), Jackson Rathbone (“The Twilight Saga: Eclipse”) and Amanda Plummer. Lerner wrote the film for Sneider, a high school classmate who'd also appeared in his short film “The Replacement Child,” which won two Student Emmys in 2007.

The film, shot in Lerner's and Sneider's hometown of Wayland, Mass., and looking for distribution at Toronto, follows a young man with Down syndrome who comes into a substantial sum of money and uses it to pursue a romance with the young single mother he's had a crush on since they attended high school together.

It’s about one man's yearning for connection and romance in unlikely circumstances – and also, Lerner pointed out at a Q&A following the screening, about kindness in tough times, certainly a universal (and timely) theme.

EXCLUSIVE FROM TORONTO: In the second major acquisition of the day at the Toronto Film Festival, Dirty Girl is near a deal to be acquired by the Weinstein Company for distribution in the U.S., France, U.K., Australia/New Zealand, and South Africa. I’m told there is a guaranteed theatrical release, and that the deal is north of $3 million. The deal is coming together quickly, and in short proximity of the film making its Toronto premiere this evening. The Abe Sylvia-directed indie is set in the 1980s and is about a young lady who is considered the dirty girl of Norman High School. After she gets banished to a remedial class, she teams up with an innocent and they head out on a road trip of self discovery. The film stars Juno Temple, Dwight Yoakam, Milla Jovovich, and Willam H. Macy. 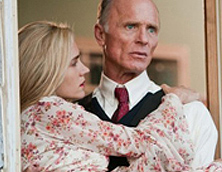 Jennifer Connelly stars as Virginia, a charming yet mentally ill mother whose greatest love is her protector and illegitimate son, Emmett (Harrison Gilbertson). Richard Tipton (Ed Harris), the local married Mormon sheriff, who is running for public office, might very well be Emmett's father. Their boardwalk town's peculiar secrets are threatened when Virginia's son begins a romantic relationship with Tipton's daughter (Emma Roberts) sending mother and son on a mad dash to seize their own brand of the American Dream – guns blazing.

Lerner’s “Girlfriend,” which was shot by Cinematography alumna Quyen Tran and employed many TFT alumni, is about a man in his twenties with Down syndrome who wants to find love from a woman. The movie stars Evan Sneider (“The Replacement Child”), Shannon Woodward (“The Riches,” “Raising Hope”) and Jackson Rathbone (“Twilight Saga”).