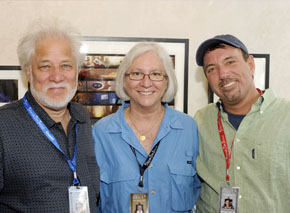 Several representatives of the School, including Dean Teri Schwartz, were on hand in the gorgeous Colorado resort destination over the Labor Day weekend when the UCLA Film & Television Archive received the Telluride Film Festival's prestigious Silver Medallion for 2010.

On Saturday, Dean Schwartz and TFT hosted and sponsored the Guest Director/Artist Reception at the Ralph Eggleston Gallery. The reception honored two of the Festival’s most distinguished guests: Pixar animator, writer and art director Ralph Eggleston, who has worked on a dozen classic films, including “Wall-E” and “Up” (and created the 2010 Telluride Festival poster) and novelist Michael Ondaatje (“The English Patient”), who was this year’s Telluride Guest Director, programming several of his favorite films at the Festival.

It was a rousing and rollicking party. Many filmmakers from the festival turned out to mingle, to share stories and to compare reactions to the many remarkable films shown this year. To a person, filmmakers were in awe of range and quality of TFF’s curating.

“Most importantly,” Schwartz says, “everyone universally commented that there is no better way to see movies than during this illustrious four days in the mountains — without the pressure of a marketplace and simply for the love of movies and of advancing the art of great filmmaking. Without question, between the reception and the Medallion ceremony, and the Archive’s programming for special screenings, TFT and UCLA were the talk of the festival wherever we went.”

The Medallion ceremony followed on Sunday.

Prior to the presentation Professor Jan-Christopher Horak, director of the Archive, showcased a program of clips, "Treasures from UCLA," that highlighted some of this world-famous organization's major restorations, including newsreels, short films and before/after clips.

The Medallion was then presented to Dean Schwartz, who confered it, in turn, upon Horak.

To celebrate the award, several special programs screened at the Festival, including the Archive's restoration of "Chicago" (1927), presented with live musical accompaniment by the Mont Alto Orchestra, and the Archive's print of "Brandy in the Wilderness" (1968, Stanton Kaye), scheduled for future restoration.

“The Archive is truly a jewel in the crown of the School of Theater, Film and Television," Schwartz said earlier, in a prepared statement. "Not only a source of enormous pride for its work in preserving these key elements of cultural history, but also as a unique educational and exhibition resource for our faculty, students and everyone who loves and treasures film.”

“The UCLA Film & Television Archive is honored to receive this award,” said Horak, "especially from a Festival that not only features some of today's best contemporary filmmakers, but also regularly pays tribute to the classic films and filmmakers of the past.”

TFT alumnus Alexander Payne MFA ’90, who was Guest Director at last year’s Festival, returned this year as a member of the audience. He told Deadline Hollywood’s Pete Hammond that “his favorite film so far was the Martin Scorsese documentary about director Elia Kazan, ‘Letters To Elia,’ which screened earlier that afternoon. As for his own career, Payne hopes to finish post-production in January or February on his latest, the George Clooney-starrer ‘The Descendants,’ which Fox Searchlight will release sometime in 2011.” The film is a likely candiate for submission to next year’s Telluride Festival, the director indicated.

The UCLA Film & Television Archive is internationally renowned for its pioneering efforts to rescue, preserve and showcase moving image media. Many of the Archive's most important restoration projects — “Double Indemnity” (1944, Billy Wilder), “The Red Shoes” (1948, Michael Powell & Emeric Pressburger), “The Night of the Hunter” (1955, Charles Laughton), “Scorpio Rising” (1963, Kenneth Anger), “A Woman Under the Influence” (1974, John Cassavetes) and “The Times of Harvey Milk” (1984, Robert Epstein) — have been screened at prestigious events around the globe and released on DVD. A unique resource for media study, the Archive protects a vast collection of film, television and digital media. The Archive Research and Study Center (ARSC) on the UCLA campus provides unique and free access to its collections for more than 10,000 international visitors each year. The Archive also screens an ambitious year-round film program at its Billy Wilder Theater, bringing the world's cinematic treasures to Los Angeles audiences.

The vision of the UCLA School of Theater, Film and Television is to serve as a premier global interdisciplinary professional school that develops outstanding humanistic storytellers, industry leaders and scholars whose diverse, innovative voices enlighten, engage and inspire change for a better world. Consistently ranked as one of the top two elite media arts institutions in the world, the School offers an innovative curriculum that integrates the study and creation of live performance, moving image media and the digital arts. Its distinguished programs include writing, directing, acting, producing, animation, cinematography, costume design, lighting design, set design and sound design, and offers PhDs in Theater and Performance Studies and Cinema & Media Studies.

The prestigious Telluride Film Festival ranks among the world's best film festivals and is an annual gathering of cinema enthusiasts, filmmakers, critics and industry insiders. It is considered a major launching ground for the fall season's most talked-about films. Co-founded in 1974 by Tom Luddy, James Card and Bill and Stella Pence, Telluride Film Festival, nestled in the beautiful mountain town of Telluride, Colo., is a four-day international educational event celebrating the art of film. The Festival's long-standing commitment is to join filmmakers and film connoisseurs together to experience great cinema. The exciting schedule, kept secret until Opening Day, consists of film debuts with filmmakers presenting their works, special tributes and remarkable treasures from the past. Festival headquarters are in Berkeley, Calif.