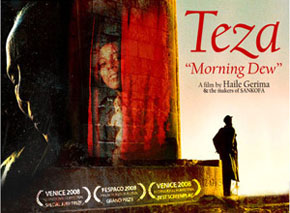 The West Coast Premiere of "Teza," an acclaimed Ethiopian drama by TFT alumnus Haile Gerima '72, MFA ’76, organized by the UCLA Film & Television Archive on September 17, became an emotional gathering place for filmmakers, friends and family members who had been associated with TFT since the heady rebellious era of the 1970s..

The screening was a benefit for a memorial scholarship fund named for the late TFT Professor Teshome Gabriel MA '76, PhD '79, who died unexpectedly in June. Gerima and Gabriel were classmates at the School in the 1970s and lifelong friends, forming the nucleus of a group of mostly minority film students that has since come to be known as the LA Rebellion.

The overflow screening was attended by several noted Rebellion filmmakers who knew and had been inspired by both men while students at TFT, including Charles Burnett '69 ("Killer of Sheep"), Billy Woodberry MFA '82 ("Bless Their Little Hearts"), and Julie Dash MFA '85 ("Daughter of the Dust").

As students and later teachers (Gerima has been a film professor for many years at Howard University), the two had complementary personalities. Gabriel, the scholar, described in his work styles of narrative that he saw as unique to Third World cinema, coining the term “nomad aesthetic” to help evoke them. Gerima, the passionate filmmaker, put Gabriel’s theory’s into practice, adapting Third World storytelling methods to modern African and African-American subject matter.

Gerima was interviewed on stage after the screening of “Teza” by Archive Director Jan-Christopher Horak. He spoke about his continuing struggles to raise money to make films, about how the experience of being a young African immigrant in the US has changed since he was a young man, and even about the “facist tendencies” of hip hop.

It was the “collective knowledge” he took from his friends at UCLA, Gerima says, that enabled him to make films, at times, almost single-handedly.

Watch the Q&A in three parts below:

Part One – Jan-Christopher Horak interviews Haile Gerima on creating the film, finding a different identity in America, and the failure of ideology. [youtube http://www.youtube.com/watch?v=Q9hIHgAuORE&feature=player_embedded]

Part Three – Haile speaks about his history in Ethiopia, his film “Ashes and Embers,” and the young hip-hop culture. [youtube http://www.youtube.com/watch?v=fgODTHUoQ0A&feature=player_embedded]

The UCLA Film & Television Archive is planning a major retrospective event around the L.A. Rebellion in 2011.

Haile Gerima was born in Gondar, Ethiopia, and says he first understood the power of storytelling while sitting around a fire riveted by tales told by his parents. His father was playwright and Gerima often traveled with him when he toured Ethiopia staging his plays.

Gerima emigrated to the U.S. in 1968, and enrolled in acting classes at the Goodman School of Drama in Chicago. He moved to California in 1970 to attend TFT, where he earned Bachelor’s and Master’s of Fine Arts degrees in film. Influenced in part by the pioneering work of film luminaries Vittorio de Sica, Fernando Solanas, Tomás Gutiérrez Alea, and Med Hondo, whose work he discovered at UCLA Archive screenings, Gerima exploits film as a catalyst for social change, rejecting what he calls the "narrative dictatorship" of Hollywood movies.