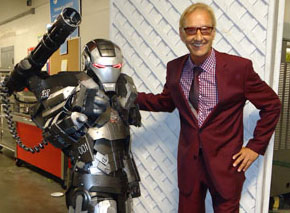 Prize for most innovative costume conferred at annual masked ball

The winners received $100 and an autographed copy of the book “Dressed: A Century of Hollywood Costume Design,” by David C. Copley Chair, Professor Deborah Landis, Director of the Copley Center. Landis and Copley traveled to San Diego in 2009 to jointly announce the founding of the Copley Center from the stage during the first prize ceremony.

Robert Blackman is a Comic Con celebrity in his own right, having designed the costumes for “Pushing Daisies” and the three most recent “Star Trek” TV shows, “Star Trek: The Next Generation, “Star Trek: Voyager” and “Star Trek: Deep Space Nine.”

“Comic-Con is a wonderful venue to see all the new action, and animated features,” Blackman said, “as well as panels featuring all your favorite action performers, as well as designers. It is a blast!”

As TFT professor Jonathan Kuntz wrote in his coverage of the event last, year,“San Diego’s Comic-Con, created in 1970 as an annual event for a few hundred fans to trade comic books, while discussing science fiction and fantasy, has grown into a pop culture Sundance that sells out months in advance to 125,000 attendees, with a guest list that challenges Cannes. [Comic Con] is the crucial launch pad for upcoming films, TV shows, games and many other forms of cult cultural media.”

Kuntz attended the Con again this year, along with daughter Rebecca Kuntz and TFT staffer Sheila Roberts. They agreed to share some of their photographic keepsakes.