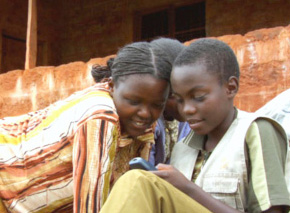 Jennifer Arnold's "A Small Act" at IFP/UN Forum, on HBO

Jennifer Arnold’s artfully simple and universally powerful documentary “A Small Act,” in which a modest gesture of generosity has ripple effects that end up changing lives halfway around the globe, was cablecast on HBO. The film was a centerpiece, along with Oscar winner Davis Guggenheim’s “Waiting for "Superman," at a daylong event on July 10, jointly sponsored by the Independent Filmmaker Project and the United Nations Department of Public Information, exploring creative solutions to the global education crisis. A specific focus is the UN’s Millennium Development Goal of achieving universal primary education. “A Small Act” was an audience favorite and a Grand Jury Prize nominee at Sundance. In June it capped a successful tour of the festival circuit with the two top prizes at Nantucket, the Adrienne Shelley Excellence in Filmmaking Award and the Audience Award for Best Feature.

The “small act” of the title was performed more than 30 years ago by Hilde Back, a Swedish kindergarten teacher who decided to sponsor a Kenyan school child. That child, Chris Mburu, was thus able to finish school and attend college and Harvard Law. As an adult he became a United Nations human rights attorney and launched a scholarship fund of his own, named after his benefactor. Arnold’s film follows both Back and Mburu, as their trajectories intersect with those of the students in Mburu’s home village who are competing for the Hilda Back Scholarship.

Reviews have mostly been raves, like this one in The Hollywood Reporter:

"Filmmaker Jennifer Arnold gracefully and fluidly tells the uplifting story of Hilde Back and Chris Mburu. She weaves a comprehensive narrative, interlacing Hilde’s spare life in Sweden with the horrifying poverty in Kenya. Her dramatic documentation of the desperate existence of Kenyan children who must pay to go to school, but are often too poor to attend, is heart-wrenching. p

"Inter-cutting between Chris’ adult life, where he works as a human-rights lawyer, and the stark poverty of rural Kenyan children, Arnold succinctly and touchingly charts what one small act of kindness can create.

"While the story itself is transcendent, Arnold’s crew of filmmakers, including cinematographer Patti Lee and editors Carl Pfirman and Tyler Hubby, have skillfully visualized and paced this splendid work."