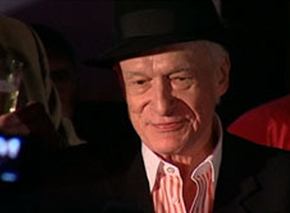 At a special event in May, the UCLA Film &amp; Television Archive paid tribute to one of its most generous supporters, Playboy magazine founder, editor and publisher Hugh M. Hefner. A devoted fan of classic American moviemaking, Hefner has frequently funded both preservation and exhibition projects at the Archive. Hefner joined TFT Dean Teri Schwartz, Archive Director Jan-Christopher Horak and Oscar-winning filmmaker Brigitte Berman (“Artie Shaw: Time Is All You’ve Got”) at the Billy Wilder Theater in Westwood for a gala screening of Berman’s upcoming documentary, “Hugh Hefner: Playboy, Activist and Rebel.”

"I love that title," Dean Schwartz said, “and at the School we have three other special names we like to use: Film lover, philanthropist and friend.”

A lifelong champion of film preservation and restoration, Hefner has funded UCLA's preservation of more than 25 feature films, including Howard Hawk's classic “The Big Sleep” and numerous Sherlock Holmes and Fu Manchu titles. In 2005, he endowed the ongoing “Hugh M. Hefner Classic American Film Program,” to assure that the Archive will be able to continue sharing classic American films with Los Angeles audiences for years to come.

Hefner has also saved LA’s iconic hillside landmark, the Hollywood sign, not once, but twice. In the 1970s he helped to restore the sign itself. This year he made the vital gift that put the campaign to save the land surrounding the sign over the top.

Brigitte Berman has produced and directed more than 100 documentaries for the Canadian Broadcasting Corporation. Her filmography includes "Bix" (1981) and "The Circle Game" (1994). Her biographical documentary about Hefner makes the case that his legacy extends well beyond Playboy and the sexual revolution, touching every aspect of American society, from the arts to politics to civil rights.

"Hugh Hefner: Playboy, Activist and Rebel" will be released in the U.S. in July and August by Phase 4 Films.