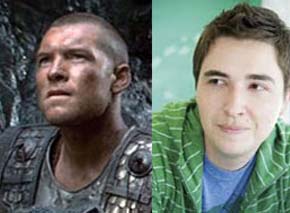 Alumnus Dan Mazeau will co-write (with non-Bruin David Leslie Johnson) a sequel to the recent blockbuster 3-D convert “Clash of the Titans.”

Mazeau was once attached to write the big-screen exploits of DC Comics’ speedster The Flash before the restructuring at Warner division DC Entertainment … “Clash 2” could go into production as early as January 2011 and will be shot in 3-D, rather than converted after-the-fact the way the first movie was.

Named a Screenwriter to Watch in 2008, Mazeau joined the UCLA Professional Program in Screenwriting in 2004. A script he wrote there, “The Land of Lost Things," won both the Professional Program writing contest and the Nate Wilson Joie de Vivre Award. The script was sold to Nickelodeon in 2006 and Mazeau has been working steadily ever since, on high-profile projects such as a live-action “Jonny Quest” adaptation at Warner Bros. and an as-yet-untitled thriller about a privately funded expedition to the moon, for producer Steven Spielberg and director Doug Liman.