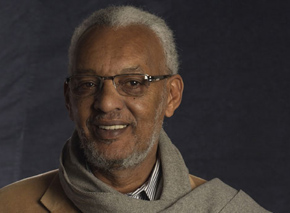 Beloved scholar and teacher mentored a generation of academic activists

Sadness swept the TFT community on Tuesday at the news of the sudden passing of one of the School's most respected and personally beloved professors, Teshome H. Gabriel, MA '76, PhD '79. Gabriel was rushed to Kaiser Permanente Medical Center in Panorama City early in the morning of June 15. Cause of death is listed as sudden cardiac arrest. He is survived by his wife, Maaza Woldemusie, and their two adult children, daughter Mediget and son Tsegaye.

A pioneering scholar and activist, Gabriel was an internationally recognized authority on Third World and Post-Colonial cinema. He had taught Cinema & Media Studies at TFT since 1974, and was closely associated with the UCLA African Studies Center.

“He was a brilliant, gracious, elegant and generous man,” said Teri Schwartz, dean of the UCLA School of Theater, Film and Television. “Teshome was a consummate professional and a truly beloved faculty member at TFT. He will be greatly missed by all of us. We send our love and condolences to Teshome’s beautiful family at this difficult time.”

Gabriel's colleagues recalled his warmth and generosity. In stunned e-mails responding to the news of his death, the words "gracious," "elegant," "stately" and "playful" were used frequently. One friend referred to him as "a true gentleman," while another recalled his "gracious and gladdening presence."

“In my entire career,” said professor Steve Ricci, “I never knew anyone as genuinely engaged as Teshome. He defined what it means to genuinely care about students and colleagues.”

A UCLA Foundation memorial fund has been established in honor of Professor Gabriel. The fund will support a graduate student or students in the Cinema and Media Studies program.

Donations can be sent to:

Please make checks payable to “UCLA Foundation” and on the memo line please write “In memory of Professor Teshome Gabriel.” If you wish to contribute by credit card, please call Bonnie MacDougall at 310-206-6154. A special tribute to Professor Gabriel will be held this fall, as faculty and students return for the beginning of the new semester.

Gabriel's books include “Otherness and the Media: The Ethnography of the Imagined and the Imaged” and “Third Cinema in the Third World: The Aesthetic of Liberation." He also published many articles and was the founding director of several journals, including “Emergencies” and “Ethiopian Fine Arts Journal.”

“Teshome’s work had three main themes,” says Professor Nicholas K. Browne, vice-chair of the Department of Film, Television and Digital Media. “The unique styles of films made in the non-aligned nations of Latin America and Africa (the ‘Third World’); the issues of relating and representing ‘the Other’ (that is, people not like us); and the unique situation of filmmakers and scholars who have left the countries of their birth and occupy and reflect on their marginal, in-between place in the world — a more and more common situation in a global world of the 20th and 21st centuries.”

Gabriel’s influential 1990 essay "Nomadic Aesthetic and the Black Independent Cinema" received an Opus Award from the Village Voice for “charting out a genuinely new theory of Black cinema.” The term "nomadic aesthetic," which he coined, has come to be widely used in critical discussions of the art, music and literature of the Third World.

“The principal characteristic of Third Cinema," Gabriel wrote, "is not so much where it is made, or even who makes it, but rather, the ideology it espouses. The Third Cinema is that cinema of the Third World which stands opposed to imperialism and class oppression in all their ramifications and manifestations.”

At the time of his death Gabriel was in the process of expanding that seminal essay into a book for Blackwell Publishing, "Third Cinema: Exploration of Nomadic Aesthetics & Narrative Communities." A manuscript for a "foundational work" on African cinema was also in progress.

As a faculty member and student at TFT in the 1970s and early 1980s, Gabriel was both a colleague of and a mentor to the African American and African student filmmakers whose work came to define the Los Angeles School of Black Filmmakers, also known as the L.A. Rebellion. The group included such soon-to-be-celebrated artists as Charles Burnett, Larry Clark, Julie Dash, Haile Gerima, Ben Caldwell, Billy Woodberry, Alile Sharon Larkin, Jacqueline Frazier, Jamaa Fanaka and Barbara McCullough. The UCLA Film & Television Archive is currently preparing a major film exhibition scheduled for 2011 that will explore this key artistic movement.

The Wrap this is invisible text