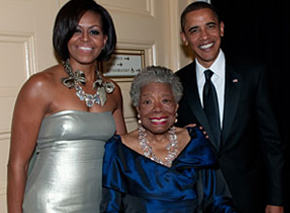 As President Obama explained from the podium, the Medal is “an honor bestowed on those who exemplify the particular focus, dedication and generosity of spirit of our 16th president.”

TFT professor Gilbert Cates is the executive producer of “America Celebrates July 4 at Ford’s Theatre,” a television special featuring the gala, which airs on ABC July 2.

“There are few people more deserving of the Lincoln Medal,” Obama said of the two honorees.

“There are few better examples of how the spirit of our founding fathers did more than just create a nation, it inspired people in every corner of the globe yearning to be free.”

Tutu, who was introduced by poet Maya Angelou, spoke of the global need for peace and respect. He condemned last week’s clash in which nine activists were killed aboard a ship headed to the blockaded Gaza Strip.

He said he hoped his award would make “many more realize that revenge, retribution – no – are not the way to go. That true security is not something that comes from the barrel of a gun.”

Sachs was introduced by Supreme Court Justice Ruth Bader Ginsburg, who praised his record of “defending the oppressed and opposing evil in his native land in the grim years of apartheid.”

A longtime admirer of Abraham Lincoln’s writing, Sachs said he felt a connection between the historic president and Obama. This spark was made more powerful by Obama’s presence in South Africa, where Lincoln’s legacy was influential on the nation’s new leaders.

Ford’s Theatre awards the Lincoln Medal “to individuals who exemplify the legacy and character embodied by President Abraham Lincoln,” who was assassinated at the theater in 1865.

The gala featured performances by “American Idol” winner Kelly Clarkson, who sang “Everybody Got Their Something,” and pop star Lionel Richie, who sang “All Night Long.” Dick Van Dyke performed a medley of songs from his children’s movies, and soprano Renee Fleming sang pop song “In Your Eyes.”