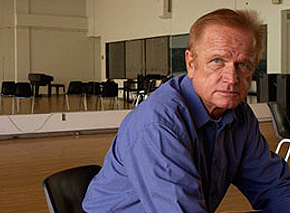 Dedicated TFT theater professor Bill Ward, who served as chair of the Theater Department for more than 17 years, has decided to retire from the School.

Ward came to UCLA in 1965 as a graduate student and went straight to work in film and television ("The Red Skelton Show," "The Dean Martin Show") as a lighting designer and technical director. In 1969, he was hired as a member of the faculty of what was then called the "Theater Division," to teach lighting design and technical theater. He was also appointed Technical Director for all the theater productions. He served four Chancellors and eight Deans while earning promotion to full professor and the chairmanship of his department – twice, serving from 1987 to 1993 and again, from 1998 to 2009.

In 2001, he created Design Showcase West (DSW) to add a theater-related event to the School's annual, year-end Festival of New Creative Work. DSW is now the only such showcase in the nation, an opportunity for top students in costume, set, sound and lighting design to display their work to industry professionals.

"We are all deeply grateful to Bill for his many years of extraordinary service to the School," said Teri Schwartz, dean. "Teaching more than a thousand students in a career that spanned four decades, serving admirably as chair for so many years, and on top of all that, creating DSW as an enduring legacy for himself and the School – we will never be able to thank him enough."

Former deans Gilbert Cates and Robert Rosen also spoke warmly of Ward. Cates highlighted his "formidable steadfastness during both ups and downs, in good times and bad," and Rosen pointed out Ward's "intelligence and equanimity, marked by a sublime confidence that growth and innovation were necessary even under the most difficult circumstances."

What emeritus screenwriting professor Lew Hunter recalled most warmly was Ward's exceptional collegiality: "This wonderful colleague of ours went from room to room and from building to building almost every day at 5 o’clock to ask how things were going. That was enough for me to admire dear Bill Ward forever."

Throughout his association with TFT, Ward's reputation as a professional designer of lighting and other advanced high-technology systems for theater, film, television and opera continued to grow. His research projects have included MiComm, SmartMotion and Light Pallet-90, and his systems for the rigging and the control of lighting, scenery and/or acoustics have been selected for installation in more international performing arts venues. They are recognized as the world standard for lighting control in professional theater, television and opera. He has directed major research and development projects for Strand Lighting, Colortran, Protech Inc. and Hoffend & Sons and is the president of Control Research & Engineering Corporation.