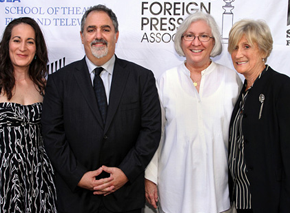 TFT’s annual Festival of New Creative Work is a joyous year-end celebration of the achievements of our gifted students, in every branch of the performing and media arts.

This year’s festival, produced by professor Myrl Schreibman, was widely praised as one of the strongest in recent memory.

For many, the weeklong celebration reached its emotional high-point when the School’s dean, Teri Schwartz, presented the first ever Champion Spirit Award for industry mentorship to the man who launched her own career in the movie business, legendary producer and director Roger Corman.

The Distinguished Achievement in Screenwriting Award, voted by the program’s students, was presented this year, to alumna Laeta Kalogridis (“Avatar”) by the host of the event and a TFT alumnus, screenwriter Dave Johnson ("Orphan"), who was a great addition to the evening. providing some very funny moments. Kalogridis’ award was presented by her “Avatar” producer Jon Landau, with whom she acted out the tumultuous ups and downs of the producer/writer relationship during a pre-show photo-op. 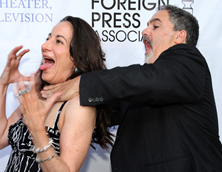 At this highly anticipated annual event, graduate students in the UCLA Producers Program compete by pitching feature film projects to a panel of industry judges. It’s just like pitching at a studio — if the studios made pitching a gladitorial spectator sport before a live audience.

Each year at Marketplace the School and the Producers Guild of America present their Vision Award to a producer or producers whose careers exemplify quality, persistence and integrity. The award was presented this year to Hawk Koch by producer Mark Gordon. The two had been elected co-presidents of the PGA only days earlier.

Always one of the hottest tickets at Festival, Animation Prom showcases the work of this world-famous “one person, one film” program, which has produced such ink ‘n’ paint (and digital) luminaries as David Silverman '79, MFA '83 (“The Simpsons Movie”), Gil Kenan NFA '02 (“Monster House”) and Shane Acker '98, MFA'04 (“9”).

This year’s Outstanding Contribution to Animation Award was presented to alumnus Randy Cartwright, who worked on "The Rescuers," "Pete's Dragon" and "The Fox and the Hound,” and won a Scientific and Technical Oscar for his design of Disney's first computerized animation painting system. His most recent work was both storyboarding and animating on the Walt Disney production of "The Princess and the Frog."

Roger Corman was honored with the School’s first-ever Champion Spirit Award, which recognizes an entertainment industry figure who has, over the course of their career, shown the courage, foresight and integrity to nurture, mentor and champion new talent..The award was presented by Teri Schwartz, dean of the School, at the Directors Guild of America Theatre in Los Angeles.

"I am overjoyed to be honoring my mentor who helped me begin a career in the film business," said Schwartz, a 32-year veteran movie producer. "It is crucial that we all follow Roger’s lead and reach out to new, young filmmakers, who are the future of our industry.”

Lee Daniels, whose film "Precious: Based on the Novel Push by Sapphire" was nominated earlier this year for six Academy Awards, including Best Picture and Best Director, received the annual Filmmaker of the Year award, conferred upon a director whose work embodies the highest standards of the profession.

The selection of Daniels for this award was not a surprise, as “Precious” was one of the most discussed and admired films of the past year among TFT students and faculty members. The award was presented by fellow director Martha Coolidge.