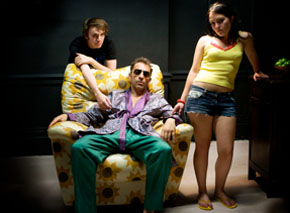 UCLA's highly selective playwriting program regularly graduates playwrights who go on to enjoy great professional success. But the first six months of 2010 have been especially triumphant with theaters around the world staging more than a dozen plays penned by UCLA alumni and current students.

Once a two-year Program, UCLA's theater department transitioned to a three-year curriculum in 2003, giving students more opportunities to write in a variety of formats and to develop their voice.

"They have a more extensive, hands-on and practical experience with their plays in the three-year program," said Edit Villarreal, chair of UCLA's MFA playwriting program.

In order to insure its students have sufficient resources to develop and stage their work, UCLA's theater program only accepts three or four of the 70 aspiring writers who apply every year. A rigorous vetting process requires applicants to submit two scripts and interview with faculty members.

The challenging curriculum requires first-year students to write a 10-minute play for a national MFA playwrights' festival. This year, UCLA's students swept the competition as three plays by Bruins were selected to receive staged readings with professional actors in festivals around the nation.

Meanwhile, at least 11 UCLA alumni playwrights have critically acclaimed productions that have been staged or are scheduled to run sometime in 2010, including six by writers who graduated within the last three years.

Productions currently in theaters or scheduled to run by year-end:

“Ballad of Sad Young Men," by Jerome A. Parker MFA '09, in Los Angeles

"Lascivious Something," by Sheila Callaghan MFA '97, in New York

"The Twentieth Century Way" by Tom Jacobson MFA '85, in Pasadena

"Raindogs," based on Lanford Wilson's "Balm in Gildead," by Rose Martula, on London's West End
"NOgoodDEED," by Matt Pelfrey MFA '05, in Pasadena

Other now-closed productions staged in 2010:

"Trog and Clay (An Imagined History of the Electric Chair)," by Michael Vukodinovich MFA '07, in Santa Monica

"English Only: A Fight for Words in America," by Annette Lee MFA '09, in Torrance

"In the Company of Jane Doe," by Tiffany Antone MFA '08, in Santa Monica, CA

Productions currently in theaters or scheduled to run by year-end:

This play about a soldier who returns home between two tours of duty in Iraq got its start as a Francis Ford Coppola One-Act workshop production. A member of the "Old Vic New Voices" program in London, Jerome was recently selected for The Public's Emerging Writers Group. His play "Miracle in Monroe" received the 24th Lorraine Hansberry Award, presented in memory of the author of "A Raisin in the Sun," for the best student plays about the African-American experience.

Sheila received the Princess Grace Award for emerging artists in 2000 and has been working steadily in theater, film and television ever since. Her works have been produced both nationally and internationally and have won numerous awards including the prestigious Whiting Award. She has received grants from NYFA, NYSCA, and the MAP Foundation and has taught playwriting at several top universities. She currently writes for the Emmy-winning Showtime series “The United States of Tara" and is adapting the TV series "I Dream of Jeannie" for Columbia Pictures.

Based on the true story of two actors who worked to entrap homosexuals for "social vagrancy" in the public restrooms of 1914 Long Beach, this play is one of three world premieres that Tom has going into production this year. "The Chinese Massacre (Annotated)" will premiere at the Circle X Theatre in Los Angeles while "House of the Rising Son" will premiere at Ensemble Studios Theater in Los Angeles. His play "Cyberqueer" has had multiple productions in Los Angeles, New York, San Francisco and San Diego, while "Ouroboros" won the LA Weekly award for best new play and production of the year in 2005.

Composer Andrew McBean saw Rose Martula's gritty play "Brooklyn" at the Cock Tavern Theater in London and introduced her to Pulitzer Prize-winning playwright Lanford Wilson, who was looking for a female writer to help him remake "Balm of Gilead." Her play, "Salsa Saved the Girls," played at the Old Red Lion Theatre in London in 2007. Rose was a Young Playwrights finalist and was selected by Dramatists Guild Magazine as "1 of 50 playwrights to watch."

A member of the first class of playwrights to graduate from UCLA's three-year MFA program, Matt wrote this play for the advanced playwriting class in his second year. Matt's plays have been produced in New York, Los Angeles, Chicago and South Africa and he was a recent winner of the Back Stage Garland Award for playwriting. Earlier this year, he adapted John Ball's "In the Heat of the Night" for Godlight Theatre Company in New York, where he serves as a resident playwright. He is also writer-in-residence at Furious Theatre Company.

Other productions previously staged in 2010:

"Trog and Clay (An Imagined History of the Electric Chair)," by Michael Vukadinovich MFA '07 April 15 – May 15 The Powerhouse Theatre, Santa Monica

Based on the trial of the first man put to death by electrocution in 1890, this dark comedy was directed by UCLA professor Gary Gardner and is Michael's third staged production this year. "A Giant Arc in the Skyspace of Directions" played at the Powerhouse Theatre in March while the Son of Semele Ensemble in Silverlake staged a production of "Terrarium" in April. Mike won the 2007 Samuel Goldwyn Screenwriting Award, the 2006 Tim Robbins Playwriting Award for plays of social significance and is currently developing a series for Starz.

"English Only: A Fight for Words in America," by Annette Lee MFA '09 One night in April Nakano Theatre, Torrance Cultural Arts CenterTorrance

In the 1980s, residents of Monterey Park were so upset by Chinese immigration that they banded together to make English the city's official language. Annette's comedic drama was part of the 2010 Works in Progress series Enduring Spirit, commemorating the 45th Anniversary of the Immigration and Nationality Act. Annette began her career as an actor and has written several award-winning plays for the stage as well as radio.

Angela's child-friendly version of Shakespeare's classic play was the inaugural production of L'Enfant Terrible, the theater company Angela co-founded. The company strives to make theater accessible and affordable to families. Angela started her career as an actress and appeared in several plays with the Actors’ Gang. She and her twin sister, Jordana, starred together in an independent horror film and shared a Jury Prize for Best Actress at the Hoboken International Film Festival.

A founding member of the award-winning sketch comedy troupe the Latino Comedy Project, Erica wrote this comedy about a multigenerational Mexican-American family to explore the fine line families tread between keeping track of one another and butting into each other's business. The Austin Critics Table nominated the play for the David Mark Cohen New Play Award. Erica, who plays the role of Yolanda in the play, also received a nomination for Best Acting in a Supporting Role.

This comedy about a woman who clones herself to get more done was a Princess Grace semi-finalist in 2006. Two years later, Tiffany became a Hawthornden Fellow, a prestigious British literary award, which includes a writing residency in Scotland. Her play, "Ana and the Closet" was both a Jerome Finalist and O'Neil semi-finalist for 2009. Tiffany is literary manager of The New LATC, in charge of new play submissions and play development programs. 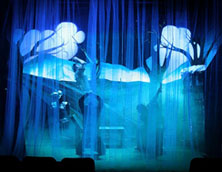 Set in a Cuban-fusion restaurant, this play about a blind-date gone horribly wrong was part of "The Fresh Five, by Five Fresh Playwrights," produced by The Twenty-Percent Theatre Company in the Twin Cities. Rachael is the founder and co-producer of Table Salt Productions in Minneapolis, which opened its first season last year with a production of her play, "Burned." An accomplished playwright and actress, Rachael has earned two George Burns and Gracie Allen Comedy Fellowships for her performances. Her one-act play, "Wolves," was featured in the documentary of the same name, directed and produced by Bulgarian director Martin Kisslov.