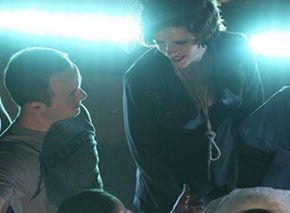 Theater alumna Elizabeth Reiko Kubota Whitney, ’80, has established a $750,000 endowment that will fund the School’s first four-year scholarship for undergraduate theater students, covering tuition, room, board and other expenses – costs that can add up to almost $30,000 per year.

“Words cannot fully describe the depth of our gratitude to Liz Whitney and her family for their unparalleled generosity, friendship and vision in establishing this very special full ride scholarship,” said TFT Dean Teri Schwartz. “This is a landmark gift for the School, and one which demonstrates Liz and her family’s profound commitment to fostering excellence in education. This scholarship gift will most certainly serve as a transformational opportunity and experience for all of the outstanding students who become the beneficiaries of Liz and her family’s extraordinary generosity for many years to come.”

Whitney attended TFT in the 1970s and had some success as an actress and singer in the 1980s, before marrying private investment banker Kenneth Whitney in 1991. As she explains in this exclusive interview, the Jeanne Michiko Kubota Fund was named for Whitney’s late sister, the woman who made it possible for her to pursue her Sound of Music dreams at TFT, and first established at the UCLA Alumni Association.

ELIZABETH WHITNEY: We started this scholarship because I wanted to give something back, because UCLA has been such an important part of my life and to honor my sister Jeanne, who had a crucial influence on my decision to attend and my ability to attend.

She was 12 years older than me, married and living in Southern California when I was in middle school and high school. She worked for Pac Bell and was a huge USC football and UCLA basketball fan. She loved John Wooden. Often when we went down from Lodi to visit her, she was watching Bruin basketball, and I fell in love with UCLA basketball through her. UCLA became the only school I wanted to attend.

I got accepted to UCLA, but my family was struggling. They had already put three older children through college, and even though the cost was, I think, only about $200 per quarter in fees and maybe $150 a month for the dorms, it was still hard at that point. They wanted me to drop out and work, and go back after I’d saved some money. But I knew, once you drop out it is so hard to get back into being a student. It was my sister Jeanne who stepped in and paid for me to go to UCLA to study theater.

It was always going to be a loan. I was going to pay her back after college. Around 1991, I had a conversation with her, and I said, “I never paid you back.” She said, “I didn’t expect you to.” Then in 1992, she passed away from colon cancer — the same year my first daughter was born. So our scholarship is called the Jeanne Michiko Kubota scholarship because it is in honor of my sister and it is really from all of us, from the whole family. The funding for it was actually my Christmas present last year.

Was theater what you always wanted to study? How did you get interested in being an actress?

It was when I first saw Julie Andrews in The Sound of Music. I used to do numbers from it in elementary school, going out on the lawn and spinning around and singing. That was really my first love, even though UCLA didn’t have a musical theater major, then, like the Ray Bolger Musical Theater Program. If you wanted to study that, you did the musical theater workshop taught by Gary Gardner, a very popular professor.

The workshop was every Saturday morning, and you would get up and sing your audition piece and then the class would critique you. Gary said to me, at one point, that because I was Asian, Japanese-American, I would have to be just that much better than the next person. He said, “You have a good audition piece but if you're going to get work you will have to be even more special.”

I was involved with productions created by actor friends who were in activist groups for minorities, to try to break out of the stereotypical roles [so that] an Asian wouldn’t always have to play the gardener. But, as it turned out, the reason I got my Equity card was because one year everybody was doing revivals of Flower Drum Song. Lots of people were looking for Asian performers.

A lot of my friends went on and made a living at their craft. I was never able to make a living doing it. I was a waitress at my uncle’s restaurant at the Rancho Park golf course, which was great because it was right down the street from 20th Century Fox, and he would let me take time off to go on auditions. I performed with an improv comedy troupe called Cold Tofu, which is still active. I had roles in several TV shows of the 1980s, including MacGyver and T.J. Hooker. One of the things I am proudest of was appearing in August 6th, 1945, an ensemble piece about the bombing of Hiroshima at the Mark Taper Forum in 1982. Larry Riley was in that, and Bonnie Franklin. It was a great cast and a great experience for me. The thing I did that was most widely seen, I think, was a music video for the John Waite song “(I Ain’t) Missing You.” I played the girl who broke the singer’s heart! It was the No. 1 video on MTV in 1984.

Now you’re in the position of being able to help other people develop a career who might otherwise not be able to pursue it.

When we transferred our support to TFT, I wanted the gift to make a significant difference in a student’s life, especially in these tough financial times.

You’re paying forward the debt you feel you owe your sister, but at today’s prices.

The cost of attending college has gone way up and there are many more people than ever who are not able to afford it. Over the years, I would get calls asking for donations from students who were volunteering with the Alumni Association, and I would ask them what the tuition was. The first time I heard it had gone up over $1,000, I was like, ‘Oh man!’ Now it’s over $10,000 and the combined cost to attend is almost $30,000 per year.

In the past, the department has lost some very good students because it was not able to offer a financial package that is competitive with other institutions. We feel very fortunate, all of us, the whole family, that we are able to do something about that, at least for a few talented students.