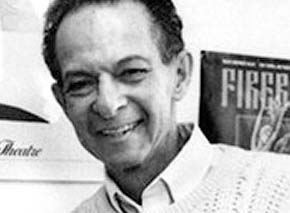 Larry Warren '54, dance biographer, choreographer, teacher and director, passed away on Dec. 9, 2009. He was the author of two books, “Lester Horton: Modern Dance Pioneer” and “Anna Sokolow: The Rebellious Spirit.” For the latter he received the 1991-92 De la Torre Bueno special citation awarded by Dance Perspectives.

Born in Brooklyn, Warren moved to North Hollywood with his family in 1948. He began his dance training in Los Angeles at the Ruth St. Denis Studio, with Denishawn-trained dancer Karoun Tootikian, and performed with the Concert Dance Group of the Ruth St. Denis Studio. Evening-long chats with St. Denis in the tiny patio behind her California studio triggered his interest in dance history and research.

Warren received his undergraduate degree in Theater Arts from UCLA, where his love of dance theater was furthered by his success in his senior year in the lead role in the dance drama performance of John Steinbeck's “The Pearl.”

After graduating from UCLA in 1954, he produced several concerts featuring his own choreography, and served as president of the Board of Directors of the Southern California Dance Alliance. During that time he danced with the Guild Opera and the San Francisco Opera Company.

He returned to UCLA for graduate work in dance at the School of Arts and Architecture, where he completed his Master's thesis on Lester Horton, and, with encouragement from Professor John Martin, began to work on a biography of Horton.

Warren joined the faculty at the University of Maryland in 1971, where from 1972 to 1988 he co-founded, and directed, Maryland Dance Theater, a critically acclaimed repertory company in residence at the University of Maryland at College Park. His own choreography for the company earned him praise for his wit, imagination and ability to create dramatic structures, characters and atmosphere.

Upon his retirement in 1995, Warren became Professor Emeritus of Dance at the University of Maryland in College Park. He is remembered by students, friends and family as a man of much passion, warmth, generosity and insight, one who took great delight in adventure.

His wife and partner of 36 years, Anne Warren, is associate chair of the Dance Department at the University of Maryland.