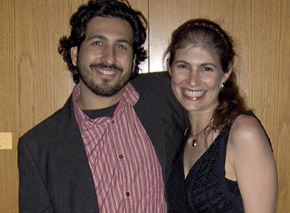 Warthogs rule for Diaz and Sagalowsky

A sitcom written by two TFT students, Julie Sagalowsky and Alex Diaz, went to pilot this month in Toronto under the auspices of Family Channel Canada.

The show, “What’s Up, Warthogs!,” follows the antics of a group of teens who team up to transform their school’s boring PA announcements into a hilarious news show that comments on, as well as reports, the latest news.

The multi-camera comedy about a group of awkward teens was created and written by Sagalowsky and Diaz and is executive produced by Dolphin Entertainment.

Production on the “What’s Up, Warthogs!” pilot, which stars Eddy Martin and Karissa Lee Staples, got underway in Toronto last week.

Sagalowsky and Diaz are represented by Dobré Films.

Sagalowsky’s film “Lucy: A Period Piece” was a Directors Spotlight winner at Festival 2008. It was named “Best Comedy” at the Academy of Television Arts & Sciences Foundation's 30th College Television Awards and was a “Best Film” nominee at the 2009 BAFTA/LA Student Film Awards.