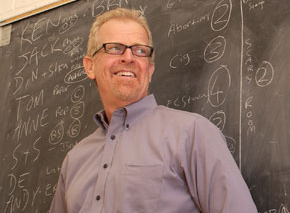 Introduced in 1961, the Teaching Award aims, in the words of the official citation, to “increase awareness of UCLA's leadership in teaching and public service by recognizing teachers for their achievements. The award gives UCLA an opportunity to demonstrate to the community, alumni, students, parents, donors and others what makes UCLA a beacon of excellence in higher education.”

Caldwell’s theoretical and scholarly writings have been featured in many journals and anthologies, and he has been a keynote and plenary speaker at various institutions and international conferences, including London Metropolitan University, UK (2007); Warwick University, UK (2006); Shanghai University, China (2004); the International Communication Association Annual Conference, U.S. (2003); the "Media and Cultural Development in the Digital Era Conference,” Taiwan (2001); and the University of Siegen, Germany (1999).

Caldwell is the producer/director of the award-winning documentaries “Freak Street to Goa: Immigrants on the Rajpath” (1989), a film about “the migratory pattern of ‘hippies’ in India and Nepal,” and “Rancho California (por favor)” (2002), a troubling look at migrant camps that house indigenous Mixteco workers within the arroyos of Southern California's most affluent suburbs.

For his film and video productions, Caldwell has also received fellowships and awards from the National Endowment for the Arts (1979, 1985), Regional Fellowships (AFI/NEA, 1985, 1988) and state arts councils (1984, 1985, 1989). His films have been screened in museums and festivals around the world and have been broadcast on SBS-TV Network/Australia, WTTW-Chicago, WGBH-Boston, WNED-Buffalo and WEIU-TV-Illinois.