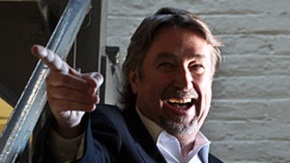 The New York Times >reports on the rapidly evolving plans of alumnus Geoffrey Gilmore MA ’79 to jump-start the distribution of independent films in the U.S., using his new office at Tribeca Enterprises as a base of operations:

Entering its ninth year, the Tribeca Film Festival is set to become associated with a new venture to distribute films digitally and in theaters under the Tribeca name. It is also embarking on another initiative to make some offerings available online to the paying public at the same time that they are screening at the festival.

Geoff Gilmore, who was the director of the Sundance festival before joining Tribeca Enterprises as its chief creative officer last year, said that such efforts were needed to keep film festivals from losing their appeal at a time when independent movie-making has been troubled by the collapse of traditional financiers and distributors like Miramax Films and Warner Independent Pictures.

“Festivals don't have the kind of promotional force they might have had a decade ago,” Mr. Gilmore said.

He acknowledged that it would take time to find a balance between the commercial purpose of Tribeca Film and the curatorial function of the festival, but described such accommodations as necessary.

“It has to do with the changing nature of what a festival does,” he added.

At the Sundance festival in January, YouTube introduced a movie rental option that offered five films, including "One Too Many Mornings" and "Bass Ackwards," as soon as they had festival premieres. Sundance has also made films available via cable and satellite on-demand services through a program called Sundance Selects.

Gilmore holds a master's degree in Film Criticism and has written extensively on the American independent film scene. He has appeared on numerous cable and radio programs, and has served on the Board of the Independent Feature Project and on the Independent Spirit Awards Committee.