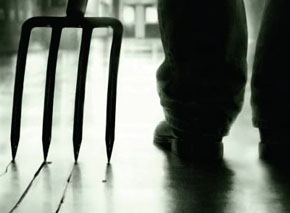 Scott Kosar MFA '01 wrote “The Machinist” (2004) while still a graduate screenwriting student at TFT – and credits the intensely personal project with changing his life.

“I wanted to write something from the guts,” he explains, “and Hal Ackerman, Richard Walter and Tim Albaugh taught me how to do that.”

“The Machinist” attracted attention for its uncompromising portrait of a personality in decline and for the shocking weight loss undertaken by star Christian Bale to depict the title character's collapse.

The film caught the eye of producer-director Michael Bay, who hired Kosar to write remakes of “The Texas Chainsaw Massacre” (2003) and "The Amityville Horror" (2005).

Now The Hollywood Reporter has announced that Kosar will be writing a film based on the infamous Vlad the Impaler, long believed to be the real-life model for Bram Stoker's "Dracula.”

“Actor Charlie Hunnam (“Sons of Anarchy”) wrote the original script,” The Reporter says, “which takes an action-oriented look at Dracula, or Vlad the Impaler, as a young prince.”

Kosar was named last year to the prestigious Lew and Pamela Hunter/Jonathan and Janice Zakin Chair in Screenwriting at the School. Established with a gift of $500,000 by Jonathan Zakin in 1999, the Hunter/Zakin program exposes students to the practical wisdom of TFT alumni now working as top professionals in the field. It is named after UCLA professor emeritus Lew Hunter.