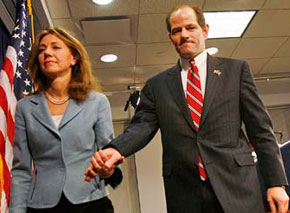 The official announcement in March of the lineup of films screening at the 2010 Tribeca Film Festival was overshadowed somewhat by one of the Festival’s out-of-competition “Special Events” — a work-in-progress documentary with unusual political resonance for New Yorkers.

As reported by the news blog Deadline Hollywood:

The hottest title in today's announcement isn’t in competition. It is an in-progress showing of an untitled documentary by Oscar winner [and TFT alumnus] Alex Gibney, about the precipitous fall of New York governor Eliot Spitzer, when the ‘Sheriff of Wall Street’ was brought down by revelations he patronized prostitutes. Given the venue and current controversy surrounding Spitzer replacement David Patterson, there will likely be a ticket demand rare for documentaries.

“As the sheriff fell,” says Tribeca’s official press announcement, “so did the financial markets. With unique access to friends and enemies of the ex-governor, this documentary explores the hidden contours of this tale of hubris, sex and power.”