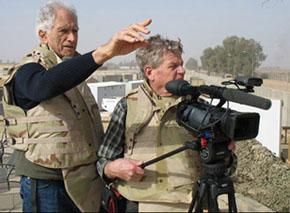 Two-time Oscar-winner Terry Sanders '54, MA '67 is one of America's most revered documentary filmmakers. Over the course of an almost 50-year career, he has directed, written and produced a dozen classic non-fiction features, including “Four Stones for Kanemitsu” (1973), “Slow Fires: On the Preservation of the Human Record” (1987), a pioneering TV special about film preservation and digital decay, “Return with Honor (1998) and the recent “Fighting for Life” (2008), about the training of US Army medics and their grueling tours of duty in Iraq.

On April 13, “Fighting for Life” will be the centerpiece of a Documentary Salon special event, hosted by revered documentary filmmaker and professor Marina Goldovskaya, an event honoring Sanders for his entire body of work. In March he welcomed into his Santa Monica home a UCLA film crew that included TFT documentary students Battiste Fenwick and Esther Shubinski. He shared his experiences making the Oscar-winning short “A Time Out of War” at UCLA in the 1950s, the challenges of building a career in documentary and reflections about the art of making non-fiction features come to life.

With his late brother, Denis Sanders '52, MA '55, he made the first student film ever to win an Academy Award: their "Time Out of War" won the Best Live Action Short subject prize in 1953 and in 2007 was added to th National Film Registry. Sanders also produced the 1994 Oscar-winning Best Documentary Feature, “Maya Lin: A Strong, Clear Vision,” which was directed by his wife, Freida Lee Mock.

Last year, Sanders was the recipient of the highest honor conferred in the documentary field, the Golden Frog, an Award for Outstanding Achievement from the International Film Festival of the Art of Cinematography, Plus CamerImage, in Lodz, Poland.