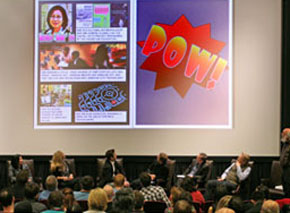 The word from the cutting edge of New Media is that while explosive change is what's making headlines, the heart of any successful media venture is right where it's always been. "It's all about a great story with relatable characters," declared Danny Bilson, a prolific TV showrunner ("The Flash," "The Sentinel") turned videogame publisher ("Medal of Honor").

Bilson spoke on March 16 as a panelist at the innovative academic/industry symposium “Transmedia, Hollywood: S/Telling the Story," the first-ever collaboration between the UCLA School of Theater, Film and Television and the University of Southern California’s School of Cinematic Arts, organized by Denise Mann, associate professor in the UCLA Producers Program, and Henry Jenkin, Provost's Professor of Communication, Journalism and Cinematic Arts at USC's Annenberg School for Communication & Journalism and the School of Cinematic Arts.

“New social-entertainment formats have entered the zeitgeist to a startling degree,” said Mann. “In addition to the plethora of webisodes, mobile-phone apps and casual games that are available online, to keep fans thinking about a favorite television series like ‘Lost’ or ‘Heroes,’ the committed fan can participate in alternate-reality games. A perfect example is the recent ‘Why So Serious?’ campaign associated with 'The Dark Knight,’ which invited Joker look-alikes across the world to come together to track down clues and solve the game.”

The all-day conference provoked lively responses from a standing-room only crowd in the new Ray Stark Family Theatre at the USC Cinematic Arts Complex. Twitter users were sending out enthusiastic tweets throughout the event. Despite the wide range of views, patterns began to emerge as participants circled back repeatedly to some recurrent themes:

There is no way to turn back the clock on active consumer involvement. Interactivity is now so taken for granted, especially by the most coveted younger media demographic, that companies are well-advised to try to guide appropriate fan activity, encouraging guided mash-ups and promotions by providing access to copyrighted material in a carefully controlled and sequenced fashion. "Let them play," as UCLA visiting professor and partner at Wildman, Harrold, Allen & Dixon LLP Alan Friel put it, "but make sure the sandbox belongs to us."

Throughout the day, panelists agreed that corporations that insist on protecting assets at all costs by closing off the sandbox to consumers are at a distinct competitive disadvantage.

Gaming is more social and less isolating than people think:

"The first post-'Pokemon' generation is moving into adulthood," said Mimi Ito, associate researcher, University of California Humanities Research Institute and the author of two books about anime and anime fandom. Ito asserted that the importance of "games as a social medium," binding fans and players together, is often overlooked. This prompted Richard Lemarchand, lead game designer for Naughty Dog Software, to repeat claims from fans who enjoy watching family members getting drawn into his "Uncharted" series of games almost as much as they enjoy playing them.

Fandom is no longer only for boys:

Traditionally a young, all-male geek preserve, fandom has expanded to include more women and girls than ever before — an audience that some content providers ignore at their peril. Production Designer David Brisbin views the increase of female fans as unequivocally a very good thing. He has first-hand experience working on projects such as the proprietary wrath of "traditional" fan boys on the recent re-make of "The Day the Earth Stood Still" and the obsessive mostly female followers of the "Twilight" properties.

Transmedia doesn't have to be expensive: 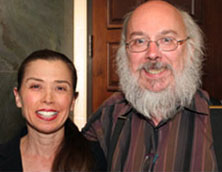 One of the defining events of the development of Transmedia, the Internet-based "Blair Witch" campaign, was masterminded by attorney and conference participant John Hegeman (currently CMO, New Regency, and a visiting professor in the UCLA Producers Program), and done on the cheap in 1999 because the filmmakers could not afford a traditional media blitz. And while pros like UCLA Alumnus Steve Wax, a co-founder and managing partner of trend-setting promotional agency Campfire, can spend up to a million and a half dollars on national alternate reality campaigns such as "The Art of the Heist," for Audi, other panelists and audience members noted that low-cost tools of effective ARG production and distribution are now available to all: websites, blogs, Flip Mino video cameras and cell phone videos airing on YouTube.

If any one overall theme dominated the conference it was that a relatable story is still the "mothership" and central source of power in the most effective Transmedia projects. "If the characters are alien, and the world is alien and the technology is alien, the audience will be alienated," said producer Danny Bilson. The "world" of a video game or film story can be hugely important, but largely because it is rich in potential stories waiting to be told. More often than not, many agreed, the best stories still originate in the creative imagination of a single individual such as "Twilight" novelist Stephenie Meyer or "Harry Potter's" J.K. Rowling. According to Diane Nelson, president, DC Entertainment, the authenticity and unity of a single creative vision is key to "maintaining the integrity of the story across all platforms."

The "Transmedia storytelling" concept was chosen for the conference to spotlight how open-ended, interactive, immersive and complex stories must now become in order to expand successfully from a traditional TV series or film into the new narrative spaces made possible by the Internet.

The alternative reality game "Year Zero," for example, created to promote the Nine Inch Nails concept album of the same name, took 18 months to unfold. Fans became part of an "Art is Resistance" movement fighting a near-future dictatorship. National deployment of clues embedded in everything from text messages to sky-writing transformed the entire country into a virtual playing field, leading fans to a top-secret "resistance meeting" in Los Angeles that included a free NIN concert.

"'Year Zero' is a perfect example," Mann says, "of the originality and expansiveness, the 'wild wild west' spirit in which all this Transmedia storytelling is taking place."