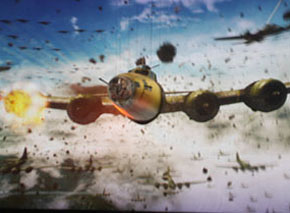 The visceral reality of warfare is evoked as never before in an innovative theatrical experience now playing at the National World War II Museum in New Orleans. With scenic effects designed over a period of almost two years by Daniel Ionazzi the UCLA Theater Department's director of production, the show, “Beyond All Boundaries,” is a 30-minute stage spectacle that draws upon the combined power of sound, video imagery, scenery and theme park style SFX such as steam, smoke and seats that tilt and rumble to immerse audiences in the experience. As the museum describes it, viewers “feel the tank treads rumbling across North Africa's deserts, brush snow from their cheeks during the Battle of the Bulge, and flinch at anti-aircraft fire as it tries to bring down a B-17 on a bombing run over Nazi Germany.”

“Beyond all Bounderies” is a museum attraction that debuted in November, 2009, with a serious educational agenda. The show has a mandate to give patrons not just a thrilling ride but an overview of the entire sweep of the history of World War II, with executive producer and narrator Tom Hanks and an advisory group of top scholars serving as a guarantor of respect and accuracy. (Hanks was also instrumental in attracting the show’s top notch voice cast, which includes Bard Pitt, Elijah Wood, Chris Pine, Viola Davis, Patricia Clarkson and many other top stars.)

As the project's Scenic Designer, Ionazzi, created all the solid, "practical," scenic elements, from scrims and panels for media projections to almost life-sized props such as the nose of a B-17 bomber and an entire concentration camp guardhouse that rises into view from the pit beneath the stage.

According to Producer Phil Hettema, president and creative executive of The Hettema Group, “‘Beyond All Boundaries’ was an incredibly complex show, with myriad scenic and technological components all competing for the same space. Dan did a brilliant job, taking all of those elements and creating a scenic plot that allowed all the elements to mesh seamlessly, without compromising on the look of the individual scenes. He's a great designer and problem solver, and his efforts played an important part in the visually stunning and impactful show experience we created.”

In addition to serving as the director of production for the Department of Theater, Ionazzi is also the production manager for the Geffen Playhouse and works as a designer and technical consultant at prestigious national and international theatrical venues. He spoke with us about the challenges of designing for a theatrical event that has so many moving parts.

DAN IONAZZI: “Beyond All Boundaries” was trying to pave new ground in terms of combining three-dimensional objects with computer generated graphics and live action video, with lighting and special effects. It’s a conglomerate of all those things, taking elements from the theme park ride, the theater and film. In the pit there are scenic items, such as, the guard tower and the anti-aircraft gun. There are three panels that come up out of the pit that are used for video projections, close-ups or inserts, with a larger image in the background. Out front there's one main bank of three projectors that cover that whole space, and the full-size screen, which is actually a scrim. That means it’s semi-opaque, so you can project on it or light behind it and let the image bleed through. And there are additional projectors providing images layered on surfaces upstage of the scrim.

The people I was working with were mostly film people, but from the very beginning my conversations with them were about making this more than just a movie on a huge screen; making it a truly theatrical experience.

One obvious element that's missing that most people associate with theater is the actor, the sense of sharing the same space with a live performer.

My purist heart would say that's exactly right, that it’s not truly a theatrical experience because we don’t have interaction with actors. Nothing that happens on the stage will change with the audience’s presence. It plays the same whether there’s a full house or no one in the house. As with any kind of museum or theme park exhibit, it's all about show control. There’s one technician there, who seats the audience, punches a button, and the whole thing runs. That means the scenery moving, the projections rolling, the sound playing, the practical scenic effects appearing and disappearing on schedule. But as an audience member, it’s certainly more of an experience than just watching a 2-D film image. There is a sense that you can go up on stage and touch these things, feel the heat, the wind, smell the smoke, feel the earth shake.

The thing that we had to be cautious about was the issue of scale of any scenic element that had to blend with computer generated graphic images or videos. There could be multiple images, too. Sometimes there was one overlaying textural scenic element and then, inset into that, videos of historical footage or news reels, or scenes that we shot here in Los Angeles, against a green screen, of actors playing soldiers walking through a bombed out city. There was a big model in the studio, and we’d mock up those scenic pieces and project on them to see if we had the right position and the right scale. We’d go back and forth constantly tweaking those kinds of technical things.

We hear occasionally about film projects where new technologies had to be developed to get the effects the creators had in mind. Did you have to develop new theatrical technologies for "Beyond All Boundaries"?

In a sense, yes, we were developing new techniques – or at least figuring out how to apply the technology we had in unprecedented ways. We were pushing it right to the edge. The projection system already existed, for example. We’ve done projections at the Geffen, we’ve done projections at UCLA on things like “Homer in Cyberspace.” This gave me the opportunity I'd been looking for to go further and play with that sort of thing in a very high-end way, with the interactivity of technologies and how you trigger them and program them. The way we used it, integrating it with practical scenery, integrating multiple projections for a layered look — the sheer complexity of the application of these technologies in “Beyond All Boundaries” was a major advance.

Were you guided more by the need to convey accurate information in a museum setting, or by the requirements of drama?

It was a mixture of both. We researched things and we got as close to reality as we could. We were questioned by museum consultants about things like what color the planes or boats actually were. But our feet weren’t quite held to the fire. At times scenic elements needed to be darker than they really were, for example, because of the theatrical environment, or because we wanted to use light in a certain way. Some liberties were taken to keep the story moving. It's very much a theatrical experience and it should touch people, the whole arc of the story. We end up with a sort of memorial on stage for the soldiers, who march across and line up, and then some of them transform into how old they would be today, and leave their brethren behind, the ones who did not come home.

We wanted to be as accurate as possible, yes, but we also wanted to have an emotional effect on the audience – and we had to go over the whole war in 30 minutes and try to touch all the key points. You just gather it all in and hope it transfers to the audience as part of the bigger story. It's intended to propel them out into the museum itself, to really dig into the details. It's meant to give them an emotional experience that ties in with the more traditional material that they would see in a museum.