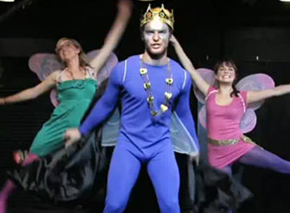 “The Butterfly King,” a five-minute film comedy produced by a group of UCLA students, is heading to the Cannes Film Festival in May.

After winning Best Picture and Best Actor (for TFT undergraduate Chris Reinacher) at the national Campus Film Awards, the film played at the Sundance Film Festival in January.

“Butterfly King” is one of many films created by a comedy collective at UCLA called The Wait List, which has been a film, comedy and improv group for just over a year.

Wait List has performed with and opened for cast members of Comedy Central’s “Reno 911” and MTV’s “Human Giant.”

“The Butterfly King” was directed and edited by UCLA Design/Media Arts student, Steven Wilson, who also wrote the score with music major Jason Lazarus. The film was produced by history major Zac Wolf and co-written by English-major Jordan Dunn and Reinacher.

These students along with alums Ali Ghandour ’08 and John Davies ’08 comprise The Wait List.