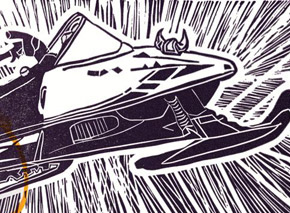 Two documentaries directed by TFT alums, “A Snow Mobile for George,” by Todd Darling MFA ’92, and “No Impact Man,” co-written and co-directed by Laura Gabbert MFA ’97, are among the 10 best environmental documentaries of 2009, according to the Mother Nature Network.

“One man's quest to understand why former President George W. Bush reversed regulations that would have banned super-polluting two-stroke snowmobiles [which] leads him on a trail of Bush-era environmental deregulation that has affected everyone from Western homesteaders to the firemen and paramedics of 9/11. The result is director Todd Darling’s eye-opening movie about the enormous consequences that can occur just from one small rule change.”

Darling’s producing and directing credits include: “Año Nuevo,” which won the Academy of Television Arts and Sciences Eric Sevareid Award; “Saviors of the Forest,” a feature documentary that screened at Sundance; “Farm Club,” for the USA Newtork; and the first two seasons of MTV’s “Laguna Beach: The Real OC.”

Also in Mother Nature’s top 10: “No Impact Man,” a sly documentary about one man’s quest to lead a zero-impact lifestyle for a single year, co-written and co-directed by Laura Gabbert MFA ’97.