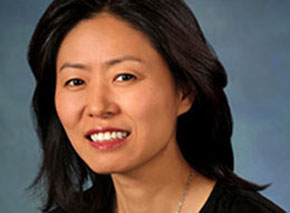 The most widely seen stage setting designed by Myung Hee Cho, who joined the TFT Theater faculty in Fall 2009, is the almost empty hospital room she created for Margaret Edson's Pulitzer Prize winning drama "Wit." Cho designed the 1998 production at the Long Wharf Theatre in Connecticut that traveled to New York and toured North America, went to London, Brazil and Israel including a stop at The Geffen Playhouse in 1999.

The setting was able to accommodate fully staged chapters of the backstory of the central character, a brainy English professor battling cancer. “My set for WIT was a white, cold and sterile hospital like environment,” Cho says, “which allowed the central character to travel in and out of reality and memories.”

The starkly simple yet expressive and flexible dramatic spaces Cho created for those productions, and many others, led "American Theater" magazine to coin the term "Natural Minimalist" to describe her organic, elegant yet functional style.

Cho continues to work on several challenging productions every year. Most recently she designed sets "The Good Person of Szechuan" at the Landestheater in Linz, Austria; "Back to Bacharach and David", at Music Box in LA; the world premieres of "Goldfish" by John Kolvenbach at South Coast Rep and Keng Sen Ong's “Awakening,” for Singapore Theatre Festival; costumes for David Henry Hwang's “Yellow Face” at the Mark Taper Forum and The Public Theater; set and costumes for Steve Connell and Sekou's “The Word Begins” at The Signature Theatre, Washington DC; and sets for David Wiener's “System Wonderland” and Julia Cho's “The Piano Teacher,” both at South Coast Rep.

Cho has worked frequently on design and costumes for opera (recently on “Le nozze di Figaro” for the Chicago Opera Theater) and for dance companies. She enjoys a close collaborative relationship with choreographer Nai-Ni Chen. The design process and the choreography in Chen productions such as "Unbroken Thread" (see illustration at right) unfold symbiotically.

Cho has been nominated twice for the prestigious Hewes Design Awards, for Set Design in 2001, for Lola Pashalinski and Linda Chapman's "Gertrude & Alice," and for Costume Design in 2002, for Naomi Iizuka's "36 Views." She received the Princess Grace Award in 1995 and a Special Project Grant by the Princess Grace Foundation in 2003.

From 2000 to 2004 she served as production designer for V-Day “Vagina Monologues” benefits at the Wiltern Theatre, the Apollo Theatre, Madison Square Garden and the Masonic Center.

TFT: As a working designer entering this new endeavor, do you find it frustrating to have to curtail your professional activities somewhat? And do you enjoy teaching?

MYUNG HEE CHO: Yes, I enjoy teaching very much. It is a great discovery how exciting it is to follow the progress of my students. It has been challenging to scale back my professional engagements to make time for my teaching load. I worried at first that I would not have that creative outlet. But I found that teaching is every bit as rewarding and personally satisfying. My students are all extremely intelligent and talented and I find I learn from them as much as I give to them. I am really quite fortunate to find myself here.

TFT: How did your own educational experience at the Yale School of Drama compare with what your students are doing at TFT?

MHC: I treasured and loved my time at Yale. I came from a graphic design, fine arts and photography background at Cooper Union. I wasn't at all interested in theater until after I graduated from college. Finding myself at Yale at that point was great, because I was nurtured and I didn't need any additional experience or more knowledge to get started there. At Yale, I discovered who I could be as an artist and I found myself growing, and I want to give that kind of opportunity to my students.

TFT: How did you first get interested in theater design?

MHC: My sister had a gift membership to the Metropolitan Opera, and we had great seats for a huge production of "Aida." I fell in love on the spot with opera and I fell in love with the stage. The design was not exactly to my taste. It was a parade of animals, including elephants—and this was a compact space, so there wasn't a breath of air left on stage. But what struck me was that someone had to design all that stuff on stage, and I was fascinated to find out about it.

TFT: Your design style has been described as "minimalist," but from what you're saying it sounds as if "functionalism" might be a better term: that you're determined to make sure that everything on stage has a reason to be there. 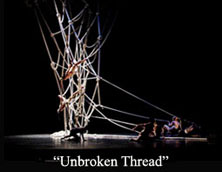 TFT: Have you ever been reluctant to work on particular projects because of the subject matter or because the director's approach wouldn't be a good fit with your style?

TFT: Like film, theater is a collaborative art form. You're always working with directors and other creative people who may have their own ideas about how things should look.

MHC: Most of the time, directors come in with an open mind and really want to hear the designer's input. Only a very few times have I been in a situation where the director came in with a clear idea of what they wanted. I think when someone calls you and wants to work with you there is an understanding and a mutual respect. But it is a collaborative process and the design ultimately has to serve the director's vision.

TFT: What do you discuss with the director? What sort of conversation would you have?

MHC: I listen to the director's ideas or try to visualize what the director has in mind. In terms of process we discuss what is in the heart the piece and how to communicate that to the audience visually in design process. When scenes are in multiple locations it is important to ask how we transition from one location to the other. It is a way of thinking together and hearing each other's ideas.

I have to say, every time I do a project I learn something new. Right now I'm designing an opera, with a 52-foot span across the stage, which is huge. The director wants a more intimate stage, so what I'm doing is creating a background landscape that surrounds the performance area. That way we can focus the audience's attention on a smaller space and still make use of the size of the stage. It is a textural landscape.

TFT: While you're very focused on theater, you've said that you strongly support the opportunity TFT offers students to also work on film.

MHC: My experience is designing for theater but I am excited about the opportunity at TFT for students to study both film and theater. I want to help them become versatile designers who can easily work in the different entertainment industries.

TFT:Is there something you have not done in your career that you would like to do?

MHC: Well, I want to continue to evolve as designer and be challenged in kind of work that I am lucky to be designing. I would love to return to the New York Shakespeare Festival to design at Central Park! It's an open-air stage, and it's so magical and captivating. The first production I saw there, it was raining and yet nobody left. The connection with the audience was mesmerizing. That's what you're always trying to do in the end: communicate ideas and emotions to an audience. aaaaaaaa