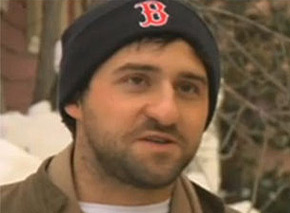 Alumnus Justin Lerner MFA ’07 has wrapped “Girlfriend,” in small-town Wayland, Massachusetts. The film charts the search for love of a young man with Down syndrome, a character portrayed by real-life Down patient Evan Sneider, who also appeared in Lerner’s award- and Spotlight-winning student film “The Replacement Child.”
Also in the cast: Shannon Woodward (“The Riches”), Jackson Rathbone (“Twilight”) and Amanda Plummer.

The idea for “Girlfriend” was concocted after Justin went home to visit his family and bumped into Evan. “We're in an economic crisis, and [the film is set] in a small town where there's lots of lying, deceit, jealousy, rage, violence,” the director noted. “Evan is pure good. He's pure innocent love. How fascinating would it be to put pure, innocent, unconditional love [...] into this world, and see what happens.”

Both Evan and his mother were in full support of the film. Evan's mother had said she felt the film was, at heart, what her son truly wanted. Together she and Justin went through the script to try to make it as accurate an interpretation of life with Down syndrome as possible.

"I really like this movie a lot. I'm glad to be working with Justin," said Evan, who had worked with the filmmaker previously in his indie short, “The Replacement Child.” "In real life, Evan Sneider himself, would want a girlfriend some day. Because he feels like he would like to be happy with someone in his life who will always be good to him.”