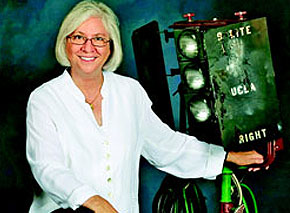 Influence as mentor cited: "shaping the next generation" invisibletextgoe rightheeeeere!

An article in The Hollywood Reporter’s annual special issue “Power 100 – Women in Entertainment” calls TFT Dean Teri Schwartz one of the “two most influential women on the planet when it comes to shaping the next generation of filmmakers.”

One woman loves to explore the world of “transformational ideas.” The other is never happier than when she’s hiking in the mountains around her second home in Taos, N.M. But Teri Schwartz and Elizabeth Daley have this in common: They are arguably the two most influential women on the planet when it comes to shaping the next generation of filmmakers.

Schwartz, the former dean of Loyola Marymount University’s film school, in June was named to head the UCLA School of Theater, Film and Television. Now she and her crosstown rival Daley (dean of USC’s film school) will bring their very different sensibilities to bear on thousands of students.

Daley — born and raised in Dallas, but with only the faintest trace of a Texas twang — is equal parts booster and visionary. She’s an intense, petite woman with close-cropped red hair and a deep intelligence who has managed to keep the likes of Steven Spielberg and George Lucas committed to USC.

Schwartz was appointed to her position in June. It’s a homecoming of sorts, since she graduated from UCLA in 1971. She’s a formidable presence, her penetrating brown eyes softened only by soft waves of stylish gray hair, but she insists — in capital letters — that she likes to have FUN! A Los Angeles native, after graduating from UCLA she earned a master’s degree in film from the University of London, then produced such films as “Sister Act,” “Life With Mikey” and “Joe Versus the Volcano.”

Daley might have an edge in reputation thanks to her long success at USC. But Schwartz beats her in at least one department: She had a bit part in the cult classic “Rock 'n' Roll High School” — playing a nun.