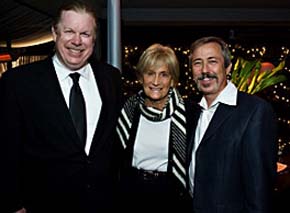 Media Services, one of the entertainment industry's leading accounting, payroll, and software providers, has established the Media Services Fellowship in Producing, a $100,000 gift to support the graduate Producers Program at UCLA's School of Theater, Film and Television.

The fellowship is designed to nurture students toward professionalism and to support recipients' work in creating and realizing their vision of a feature film project.

“Being involved in the business of entertainment for more than thirty years, we wanted to support the industry in a meaningful way,” said Media Services' CEO Greg Pickert during a brief presentation at the event. “Establishing a permanent source of funding to assist aspiring film producers with their formal training will help cultivate a stream of industry professionals for many of the markets we serve. We are thrilled to partner with such a highly regarded institution as UCLA and look forward to building a lasting relationship with the film school.”

Among the guests attending the event were Barbara Boyle, Chair of the Department of Film, Television and Digital Media, Peter Heller, Executive Director of Development & Industry Relations, Dagmar Spira, Director of Alumni Relations and Student Awards and Myrl Schreibman, Professor, Director of Entrepreneurial Activities at the UCLASchool of Theater, Film and Television.

“I'm so thankful Media Services has recognized our premiere Producers Program with this generous gift," said Boyle. "It's gratifying to note that within three months of graduating, our Producers Program students are employed in the industry or making their own films. The Media Services contribution is extremely important to sustain this result.”
The UCLA Producers Program is unique in that it addresses and encourages both commercial genre-driven projects targeted at general audiences, and innovative, “independent-spirited” projects for specialized markets and media. In the spirit of excellence, the UCLA Producers Program seeks and attracts only the brightest and most driven students and encourages them to create business opportunities for themselves and others within the larger world of entertainment.

Established in 1978, Media Services is one of the entertainment industry's leading accounting, payroll, crew booking, and software companies, serving feature, television, commercial, corporate and Internet productions world-wide as well as music video and residual clients. Media Services is headquartered in Los Angeles with offices in New York and Boston. The company is committed to driving the industry through constant innovation by offering best-in-class software solutions through its product division, Showbiz Software.

In addition to its proprietary production accounting, payroll, budgeting, scheduling and time management software, the company offers a wide range of other entertainment industry software, books, tapes, and supplies through its Showbiz Store & Cafe in West Los Angeles and New York as well as its online store.