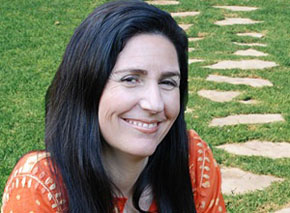 We are all very skilled at creating stories based on where we come from, based on what we feel others expect of us, based on who we think we should be in our lives. What would it be like to create a story for yourself based on who you really are? – Rhona Berens

Storytelling is the context and the goal of just about everything we do at TFT. As a defining human activity, telling stories is not confined to professional practitioners of narrative art forms such as theater, film and television. We all tell stories, in and about our own lives, and with some thought and effort we can re-write them. This is the empowering message offered by Cinema and Media Studies alumna Rhona Berens MA '87, PhD '92.

A self-styled “recovering academic” who now applies her critical skills in her new vocation as a Life Coach, Berens helps people “access their true selves” through her Los Angeles-based company Forté Dreams Coaching.

“I stumbled on the word 'storify' a few weeks ago,” Berens writes, in a guest-column published in A-List Screenwriting's September newsletter, “when I considered turning the noun, story, into a verb (e.g., to story my experiences), just like business people have morphed the word 'grow' so that now they can grow a company. Turns out, storify does what I was looking for: 'To form or tell stories of; to narrate or describe in a story;' or, most succinctly, 'to make up.' To state the obvious: Fiction writing is, at its core, the ability to storify scenarios and characters. To state the not so obvious: autobiography — including our self-focused thoughts and beliefs that we never write down — is how we storify ourselves.”

Berens did her undergraduate work at McGill University, in her native Canada, and before doing her graduate work at TFT. She taught in the field at UC Irvine for almost a decade, but after earning tenure and chairing the department, she sought new challenges in the business world. She has held posts as Vice President of Strategic Marketing at Online Partners; VP of Client Services and Customer Care at PlanetOut; VP for Business & Community Development at PeoplesMD. And through it all Berens found that “the favorite roles I played were teacher, mentor, advisor,” “helping people learn about their best selves; helping them envision and pursue their dreams.”

TFT: When you talk about the idea of how people “storify” their lives, it's hard not to think that there may be a direct link between your graduate work in Cinema and Media Studies and your current work as a Life Coach – that you're applying the techniques of narrative analysis to people's real-life stories.

RB: It's possible to look at it that way, I suppose, but it wasn't a conscious path that I followed to get to this point. I just loved teaching and helping people grow. It was only after I'd been in business for a while, when I started taking coaching classes, that I realized that coaching is just another way of working with people's stories.

Before I came to graduate school at TFT I loved acting. I thought I wanted to become an actress. Growing up in Toronto, I was in a lot of summer camp and school productions of musicals. When I went to college, my parents made a deal with me: I did not major in theater arts, and if, when I finished my undergraduate degree, I was still passionate about acting, they would help me move to New York and pursue it.

But by the end of college, I realized part of why I wanted to be an actress was that I wanted to be other people. I didn't like me. I was still too young to really understand what that meant, but old enough to realize that this was not a healthy path for me. And I think that is part of why I am here today, helping people figure out who they really are.

TFT: The most basic question: What is a story, as you understand the term?

RB: One assumption is aesthetic, the sense that a story is an account of events that is consciously shaped and has a beginning and a middle and comes to a satisfying conclusion. And in the common sense way of thinking about stories there is almost always a fictional element. A story is something that is made up. That's the way I like to put it in my work, as the way we apply some of the characteristics of fiction to our own life stories, to the stories we tell ourselves about ourselves.

It also has a lot to do with what we think of in a general way as roles. In terms of dramatic conventions, we know that one character in a piece is not as important as the others if they don't grow or change. A lot of the work I do is with clients who feel they've gotten stuck in roles like that. If we were writers, writing about characters, we could change that. We could map out how we want that character to grow and change. So how do we take control of the shape of the story of our own life, rather than just playing a secondary role in it?

TFT: Is it something as simple as, 'I feel I am only playing a supporting role, and now I want to play the lead?' Which as any actor will tell you is scary, because the star has to carry the show.

RB: One of the questions I ask my clients, when we talk about the places in their lives where they feel stuck, is precisely how does this serve them? What do you like about playing the supporting role? What is holding you back from playing the lead? Most of the time the initial response is that nothing about it feels right or good. 'I want to feel different! I want to be different!' But it must have felt right to you at some point, or it wouldn't have become so entrenched. Often it's just that it's comfortable or safe or familiar.

Something else that is important is to help people explore what their values are, the ingredients that they feel are important for them to live a fulfilling life – which is not necessarily the way they are living now. When we are asked what our values are we can often answer very quickly, but we often answer with the values that we think we should have, or the values that we grew up with. It is very hard to shift away from the stories that are destructive for us or that undermine what we are capable of. We are relying on values that aren't really our core values.

TFT: We hear quite a bit, or at least we used to, about the harmful effects of the role models in popular culture on people's self-image and aspirations. That the role models we're offered now are often negative. Is this something you've dealt with in your work?

RB: Thus far I have not had clients with fictional characters as role models. I have certainly had clients who reference business people, historical figures, maybe, against whom they measure their own success. A lot of what I do with clients is spend time to find out what success means to them, because, again, our definition of success is often the definition that is imported from somewhere else. Maybe we have imported it or assembled it from lots of different places.

TFT: I would guess that these historical figures or business figures, at least the version of them that we admire, are also partly fictional creations, a combination of facts and legends. There are the facts of their lives, but there is also a large element of legend.

RB: The notion of these sorts of successful figures as being storified, that's absolutely true. There is always a fiction attached to them. And part of the fiction we create about people who are successful is that they are not like us — which is part of why we decide we can't be successful. They are different, super human, I could never be like that.

My job is to help people access their true selves, to find their core selves, their higher selves, the part of the self that serves them best. It is not about doing whatever you want to do, or being whoever you want to be at the expense of everyone else. It's about figuring out how to live so that you are aligned with your own values as opposed to compromising your values, living the story that feels right as opposed to someone else's story.

I am advocating that people be true to themselves, and to do that we need to figure out what is really important to us. We are all very skilled at creating stories based on where we come from, based on what we feel others expect of us, based on who we think we should be. What would it be like to make create a story for yourself that is based on who you really are?

To learn more about Rhona's work, visit her at www.fortedreams.com, or email her at rhonaberens@me.com.