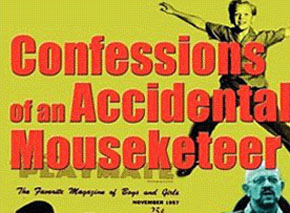 Mention Mouseketeer Lonnie Burr to Baby Boomers and watch eyes light up and hearts flutter. TFT alumnus Lonnie Burr MA '64 was the blondest and one of the most recognizable original cast members of The Mickey Mouse Club, one of only four boys and 39 children overall to last through the entire run of Walt Disney's groundbreaking variety show.

With its unforgettable theme song and an array of regular features that included short documentaries, cartoons and serial dramas ("The Adventures of Spin and Marty," "The Hardy Boys") and the singing and dancing Mouseketeers, the pioneering daytime television show was an unprecedented hit in the mid-1950s.

Mouse Club was an acknowledged influence on "Sesame Street" and a crucible of talent that in its later incarnations introduced pop stars Academy Award-nominated actor Ryan Gosling and actress Keri Russell, Lisa Whelchel, Justin Timberlake, Christina Aguilera and Britney Spears. Lonnie was one of the program's best dancer/singers and a member of the elite "Red Team" that included Cubby O’Brien, Karen Pendleton and the girlfriend of Burr's first season, Annette Funicello.

The original reason for our conversation was the publication this year of his lively and entertaining autobiography, "Confessions of an Accidental Mouseketeer." The book makes the point that Burr's career as a performer neither began nor ended with Mouse Club. It describes his many adventures as a child performer in early television, including a startling turn in the early ’50s, in black face (still considered acceptable at that time), working as a double for the diminutive and frail Eddie Cantor and his dancing style of singing. Illustrations show Burr continuing to step high in acrobatic musical theater routines well into his 60s.

TFT: It would be hard to overstate how delighted people were in our office when they found out we would be talking to you. There still seems to be huge affection out there for everything connected with The Mickey Mouse Club.

Lonnie Burr: That is one of the great things about belonging to the MMC. There are very few naysayers. I’ve met one or two but for most people it brings them back to a pleasant part of their childhood. The show was unique in early television in having us grow up not as characters, but as ourselves, kids who were maturing just as the kids in the audience were going through the same process. Our show pioneered in areas such as including educational “newsreel” segments in the mix with entertainment, way before PBS did it. And with repeat episodes all over the world, it's continued to affect people. I met some fans via email who had moved to a small town in Russia in the 1980s, when the original Mickey Mouse Club was just starting to be broadcast there. So after being fans themselves as kids in the U.S., they were able to raise their children and grandkids on the same show.

But at the same time, as I point out in the book, the Mickey Mouse Club is a part of my life, but it’s not my whole life. I didn’t even get to see it until it became available again in the '60s, when I was an adult. At that point I thought it was childish, which is the definition of a show for kids, and that I was much more advanced. I had gone to UCLA and earned a master's degree and then returned to acting in movies, television and theater. I had also begun to be published as an author. I've been annoyed at times that this phase of my life was the only thing everybody seemed to want to talk about. But the book, in part, grew out of the fact that as I've gotten older I've put it all in perspective.

TFT: You suggest that Walt Disney was not that closely involved with the show.

LB: No, he wasn’t. He did oversee major decisions, he was interested and he would step in at times. Other Mice have been saying for decades that he was always overseeing our filming but that is just not the case. He personally chose the only other accidental Mouseketeer, Annette, when he just happened to see her in the corps de ballet of a show. I’d see him on the lot and the cast filmed some things with him, but it was not his main focus. He had Disneyland to worry about, which was his main concern, as well as new movies coming out and he was in the planning stages of Walt Disney World, which would be five times bigger than Disneyland. Bigger dreams.

TFT: What was your impression of him as a person? 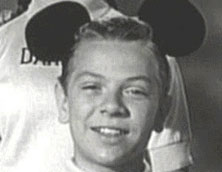 LB: He was very welcoming, pleasant and usually smiling. I never saw him arguing with someone or hollering at anybody. He grinned and it was real, it was him. He smoked his pipe when he was outside. On a very basic level he seemed relaxed and comfortable with himself. I always imagined that he had a couple cocktails in the afternoon, like Hitchcock. You know, Hitchcock had his limo arrive for him at 4 p.m. while shooting a film and it went straight to Chasen’s for his first martini.

TFT: We've all heard stories, I think, from child performers about what a difficult and traumatizing experience it can be to grow up in show business.

LB: It's an adult discipline imposed on kids, working six days a week along with three hours on the lot for school, learning pages and pages of dialogue. I knew all the lines and I was never late, because I was trying to be perfect, which was what was demanded of me by my mother. It came easier to me than for some, because I was already a pro. But being in the business always scars you, no matter how sophisticated and mature you are. What it does is take away your childhood, so that you have to go back and gather that up as an adult and become a child again, in some way or other. Not to become childish, certainly, but to try to recapture what you've lost.

Surviving the experience of being a child actor depends on who you are, what sort of personal resources you have. I had worked for seven years before the MMC. I earned my first paycheck at age five, had my first theater role at the Pasadena Playhouse at age six and my first lead at age eight – as well as my first guest star, title role lead on TV’s “The Range Rider” the same year. After completing my senior year of high school at 14, I continued on through college, achieving my bachelor’s degree at 18 and my master's at 20 at UCLA. My favorite subject was philosophy but I didn't find that out until my junior year of college as a Theater Arts major. In my 30s, I returned to take courses in philosophy, just because I loved it, but it was impractical except as a subject to teach and I wanted to continue as an actor. Dancing and singing were good additions, but were secondary to making a character come to life. It was more acting, then writing, then directing and choreographing. And if a role comes up in a musical like “Mack and Mable” on Broadway, which I did for the late Gower Champion, I can sing and dance, too, so that’s cool.

TFT: The illustrations as well as the text in your book convey an enormous joy in performing, especially in musical theater.

LB: I always was, and am still, a very good dancer and choreographer. My parents were in vaudeville and night clubs, they had a song and dance act called Dot and Dash, and my mom had me taking dance classes from the age of four. She always said it was my idea but I don't quite remember it that way – she was definitely a stage mother. The good part of it was that while I found six years of ballet boring, yet good discipline for my body, I loved tap and jazz and it came easily and has been a great part of my life. I idolized performers like Fred Astaire and Gene Kelly. I've been able to keep doing it because I've worked to stay in shape. Kenny Ortega, the director of "High School Musical" and the recent Michael Jackson film, hired me twice in my 50s when he needed a mature guy who could still hoof it. I was in the first film he choreographed and directed, “Newsies,” in which I played a singing, dancing, fighting, tough, Irish strikebreaker. And he also used me in the last season of "Chicago Hope." I did a musical number to “Luck Be a Lady Tonight” when Mandy Patinkin was having an anesthesia-induced dream during brain surgery. They needed somebody who looked old enough to be a surgeon and Kenny knew I could bring it.