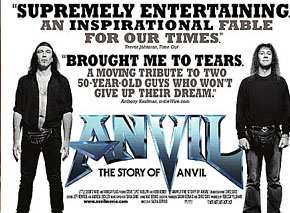 Heads were banged and hearts were warmed at awards event

A heavy-metal hymn to the human spirit, “Anvil! The Story of Anvil” has won top honors in both the IDA’s “Best Music Documentary” and its “Best Feature Documentary” categories. The announcements were made at the International Documentary Association’s awards presentation ceremony on December 4, hosted by Ira Glass of NPR’s “This American Life.”

The Los Angeles Times reported in November that “Anvil!,” TFT alum and faculty member Sacha Gervasi‘s labor-of-love rock doc about the band he worshiped as a teenaged headbanger in the UK, was a double nominee in the International Documentary Association’s 2009 Awards.

Gervasi worked as an Anvil roadie during three of the groundbreaking Canadian band's North American tours in the 1980s — -then watched his heroes fade into obscurity as many lesser imitators ruled MTV in the 1980s. “Anvil!” earned raves at Sundance in 2008 and the audience award as Best Documentary Feature at the Los Angeles Film Festival. It has been described as the most heartwarming movie ever made about heavy metal music.

Gervasi went on to write the screenplay for Steven Spielberg’s “The Terminal” and has scripts in the works for Tom Hanks, Nicole Kidman and Keanu Reaves. He is also planning his feature directorial debut: a bio-pic about actor Herve Villechaize (“Fantasy Island”), to star Peter Dinklage. Gervasi was the 2008-2009 holder of the Lew and Pamela Hunter/Jonathan and Janice Zakin Chair in Screenwriting at TFT.