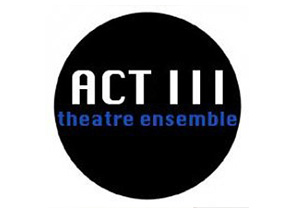 The Daily Bruin reports on an ongoing series of theatrical events on campus, founded by two TFT theater majors (event coordinator Rachel Lee and artistic director Hunter Bird) but casting a campuswide net in search of talent, seeking a diverse array of performers and performance styles.

When you imagine a song being sung from the musical "Billy Elliot," you usually don't imagine it being performed by a fully grown 22-year-old woman. This, however, is exactly the sort of vision that the UCLA theater group Act III will be providing.

At 8 p.m. tonight [November 9, 2009] in Kerckhoff Grand Salon, Act III will be performing a cabaret titled "Backwards Broadway," which is part of a six-show cabaret series that will be taking place throughout the school year.

This will be the last cabaret show of the fall quarter, with four more performances following in the winter and spring (two per quarter).

Act III is a student group on campus that seeks to provide new and innovative ways to perform theater with students outside the theater major. The group took the idea of a cabaret, a review of different kinds of songs from various musicals and centered around a unifying theme. Tonight's theme, “Backwards Broadway,” allows students to perform roles they've always wanted to do but were unable to perform because of ethnic, age or gender-related differences from the character.

The event coordinator of the cabaret series, Rachel Lee, a fourth-year theater student, said she was very excited for the performance. “Some of it is really serious, some of it is hilarious. It's all across the board – girls singing big manly songs and guys singing and dancing to these frilly girly songs, and really everything in between,” Lee said.

Other performances include three girls rapping and three grown men singing a girly ballad titled, “Turkey Lurkey Time” from “Promises Promises.” Striving to attract a wide diversity of actors for the performance, Act III opened its doors to anyone who wanted to be in the cabaret series, regardless of their year or major.

“The great thing about ‘Cabaret’ is that there's no audition process, it's just a sign-up.” said Hunter Bird, a second-year theater student and artistic director of Act III. “Students have come out of the woodwork, and the talent level is extraordinary. Audiences can expect a really great show."