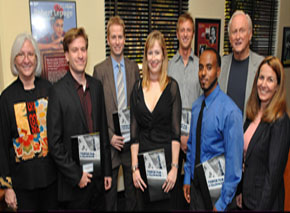 UCLA students have taken the top three honors in the 54th annual Samuel Goldwyn Writing Awards competition, which recognizes excellence in dramatic writing. The winners were announced Monday, Nov. 2, by Samuel Goldwyn Jr., president of the Samuel Goldwyn Foundation, during a ceremony at Royce Hall on the UCLA campus.

There was a tie for second between UCLA School of Theater, Film and Television students Rob Kotecki, for “Blowback,” and Eli Mael, for “Oaktown.”

The awards were founded by Samuel Goldwyn Sr. in 1955 to encourage young writers. The competition is open to University of California students. In his opening remarks before the awards were handed out, Goldwyn, Jr, recited some impressive statistics. Since the inception of the Awards in 1955 recipients have gone on to win 27 Oscars (with 101 nominations), 35 Golden Globes (189 nominations) and 87 Emmys (488 nominations), and to publish 60 books — 31 of which are by bestselling 1971 winner Jonathan Kellerman.

This year’s winners were selected from a field of more than 150 feature-length scripts submitted by students from eight UC campuses. Judges included film producer Colin Callender, actress and producer Hilary Swank, and Catherine Tarr, a story editor at Creative Artists Agency (CAA) who attended the event.

FIRST PLACE: “The Shoeshine Girl” by Joseph Tremba (San Jose, Calif.) An African-American Civil War veteran and a lost immigrant girl begrudgingly bond as they search for the child’s estranged father in 1886 New York, only to discover that the fate of the girl’s reunion relies on the completion of a statue no one in America wants to finance — the Statue of Liberty.

SECOND PLACE (tie): “Blowback” by Rob Kotecki (Detroit, MC). In Iraq’s Green Zone, Sgt. Mitch Darrow can play the system for any perk, except a one-way ticket home. After his unit is ambushed, Mitch goes AWOL to escape Iraq. But to survive, he’ll need more than his smooth talk — he’ll need to become the soldier he never was in the Army.“Oaktown” by Eli Mael (Oakland, CA.). In a hopeless city infested with drugs, violence and agony, two promising teenage brothers find themselves falling victims to the inescapable trouble of their neighborhood.

FIRST HONORABLE MENTION: “Prank” by Jennifer Barclay (born in Rochester, N.Y.; resides in San Diego, CA). A pair of ferocious female twins and their gang of Vigilante Sisters rule their college prep boarding school with renegade justice, but when one of the twins launches an attack on her teacher, their innocent debauchery spirals into an all-out war of flesh and blood.

SECOND HONORABLE MENTION: “The Landsailor” by Bradford Schmidt (Pagosa Springs, CO). Five-hundred years after an unknown cataclysmic event, a leprous sickness is driving the sparse human population to extinction. Escaping their family cult, a deformed yet clever twin and his unblemished, simpleton brother journey on a wheeled sailboat across a savage desert to chase down whispered rumors of an all-powerful, healing scientist.