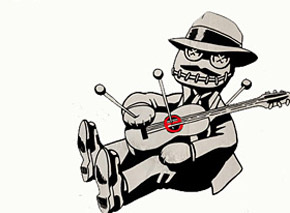 The “Daily Bruin’s” Erica Zhang Rui-ling reports on an LA Theater Ensemble production, opening October 29 at the Powerhouse Theater in Santa Monica, that employs 10 Bruins, both onstage and behind the scenes:

“I just envisioned as a lifelong Californian my fantasy of what a New Orleans ‘Wizard of Oz’ would be like," said Nye, a UCLA theater alumnus. "It would be very dark. Lots of alcohol, lots of trouble, good shoes, a brass band, some clowns (and) masks." A great number of UCLA alumni are part of the Los Angeles Theatre Ensemble, with 10 involved onstage and offstage in this production.

“It's really fun and exciting to be working with people I went to school with … and have that same foundation,” said Catherine Talton, UCLAtheater alumna. Talton plays [the tile character’s] love interest, Purdue, a sophisticated woman who can talk smut and may or may not be a ghost.

The show features a live band and cast members who also play instruments onstage, which, in addition to the usual piano, guitar and bass, includes the musical saw (used in traditional folk music), the melodica (also known as the blow-organ) and the accordion.