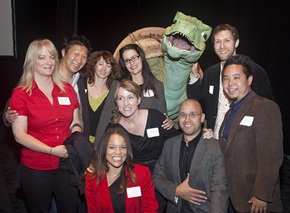 Last month about 150 alumni gathered at Walt Disney Imagineering's headquarters in Burbank, Calif., for a lively evening filled with stories from the talented team of Imagineers, where banter among classmates was capped off by an exclusive behind-the-scenes tour of the closely guarded facility.

After a cocktail reception, our co-host, Peter McGrath, vice president, creative division, welcomed the Bruins and opened the program by introducing the legendary Martin Sklar '56, who has been with the company for more than 50 years.

Sklar credited his close friend Johnny Jackson who worked with him as a student reporter at the Daily Bruin for helping him get an interview with Walt Disney.

The job offer required a writer to create the very first newspaper at Disneyland. Even though he was "scared as hell," he aced the interview and thus began his long career with the Mouse House.

Sklar delighted the crowd with colorful stories about the challenges of translating the Disney magic for other cultures. He admitted that the educational attraction about World War II for Tokyo Disney was a disaster and was later replaced with a Monsters, Inc. ride. The narration for the Jungle Cruise is filled with witty repartee however direct translations can make for jokes that fall flat he said. The solution was a total rewrite in the native tongue.

The day of our visit just happened to be the 99th birthday of legendary UCLA Basketball Coach John Wooden noted Sklar. The two were friendly when Sklar was a sports reporter before moving to the editor position at the student paper. Sklar acknowledged that the Wizard of Westwood taught him many valuable leadership skills that he has used throughout his career.

More than 150 disciplines are incorporated in the day to day work of sculptors, model makers, artists, writers, architects, sound editors, music composers, special effects managers, animators and many more. More than 1,000 Imagineers are hard at work around the world, Sklar explained.

After a brief Q&A, the guests left in small groups for an exclusive look at the new attractions being developed. Alumni toured the model shop and sculpture studio while hearing about the techniques used to make the magic millions of fans know and love.

At one stop on the tour, guests were photographed with Lucky, a life-like animatronic Dinosaur recently introduced to park visitors.

Since 2001, Bruce Vaughn, UCLA adjunct professor and chief creative executive for Walt Disney Imagineering, has been teaching “The Art and Process of Entertainment Design” at the School of Theater, Film and Television. Students learn the art of telling stories in three dimensions. Vaughn emphasizes teamwork and how to effectively pitch an idea while also scouting for future Imagineers.

While taking the class, Asa Kalama '04, theater alumnus, landed an internship that eventually led to full-time employment with Disney R&D. Today, several students have gone on to join the Imagineering team.

Special thanks to Vaughn, who made this networking event possible.

You can view more event photos on our Flickr page.