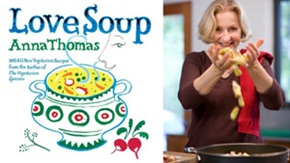 TFT alumna Anna Thomas '71, whose credits as a writer and producer include "A Time of Destiny" (1988),“My Family” (1995) and “Frida” (2002), is better known in some circles as one of the pioneer popularizers of vegetarianism in America.

Thomas’s 1972 cookbook “The Vegetarian Epicure” was one of the first to proclaim that meatless meals could be succulent as well as healthful.

A UCLA film student without much money [in 1971], she took the advice of friends who appreciated her cooking and wrote a book, and she has since balanced careers in film and food. At the moment, Thomas is working on a film dramatizing the life of Israeli poet Rachel Blaustein.

Thomas and her then-husband, director Gregory Nava, left Los Angeles for Ojai in 1985 with their two young sons. The previous year their film “El Norte” came out. Thomas and Nava wrote it; she produced, he directed, and they earned an Oscar nomination. They lived in a big ranch house, with a kitchen roomy enough for a couch.

After a divorce, and once her younger son finished high school, Thomas moved to a smaller house that snuggled up to the Topa Topa Mountains. But it needed renovation, and for three years she was left with a kitchen just 81 inches across, tucked into one part of the house. She put most of her kitchen equipment in storage.

But she kept cooking. Soup was a natural for the tiny space. And she kept inviting friends, ringing the dinner bell with e-mails announcing, “The soup kitchen is open.”