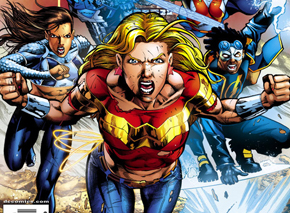 Following the debut in August, 2009, of her first play,“WWJD — What Would Jimi Do?”, Henderson began work on a long term dream project: becoming a professional comic book writer with her work the landmark 75th issue (November, 2009) of DC Comics “Teen Titans.”

As Henderson told the fan website Comic Book Resources, her experience as a television writer-producer came in handy when she was juggling the book’s large cast of adolescent super beings:

My television experience has almost always been writing for all types of ensembles, so it's what I do best. That doesn't mean that everyone gets equal screen time in each story. In my opinion, that's when stories can get into trouble, trying to service every character equally in every issue means that no one gets serviced adequately in any issue…

Are you a longtime fan of the "Teen Titans" and comics in general?

I am a long time comic book fan. I was a sickly child, which meant lots of time on the Asthma inhaler and lots of time in the house while my brothers and sisters played outside. So I created my own alternate universe and comic books helped me do that. My sisters were reading Archies and I was reading "Batman" and coming up with ways the villains could take out my younger brother. Yes, I was dark even at ten years old.

Getting a chance to write "Teen Titans" is so cool because it combines my strengths in writing teens, my love of comics, my science background, and my sci-fi sensibilities. And I've always loved the idea of creating stories about where this realm meets the spiritual/mystical one. In other words, I'm in heaven.

Have you signed on for an unlimited run or do you know your end date?

It all happened so fast and with little time to think about or talk about it much. So I don't know how long my run will be. As long as DC's happy and I'm having fun, I'll probably be around – unless you know something I don't know.

On the television/movie front, I'm developing a couple of new television series ideas and one of them is based on a DC book. That's all I can say about it for now. I'm also developing a feature film based on "Girl Genius," an independent comic that I love and can't wait to turn into a movie.

What are the major differences between writing for comics and television?

>The biggest difference between the two is that you can rely on dialogue in television and you have to rely on visual story telling in comics. In that way, comics are more like film — even more like silent film, which I love.