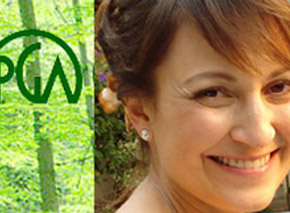 “We are working with the studios and independents to help make film and TV production more environmentally friendly," Carter says. “As producers, I believe we are uniquely placed to make a significant and far-reaching impact in the area of sustainability, affecting both workers inside the entertainment industry, and even more importantly, audience members who hear and see the message of sustainability and are moved to action in their own lives.

“That being said," she continues, “I know all too well the challenges faced in the frantic production world, where time and money are often in short supply. Coupled with the overwhelming amount of eco-information available, much of it conflicting and confusing, even the most well-intentioned ‘greenie’ can lose the motivation to act conscientiously.”

Carter has worked for 13 years for Pierce Brosnan’s production company, Irish DreamTime, and is credited as an associate producer or co-producer on “The Matador” (2005) and “The Greatest” (2009), among others. According to the PGA Green website, the organization was created as a direct response to the increasing desire voiced by producers over the last few years to be more environmentally conscious in film, television and new media productions. Given the current climate crisis and the significance of the environmental impacts of film production, a movement is growing to support sustainable production practices. The goal of the PGA Green Committee is to create a place for producers and production professionals to learn, exchange ideas, make suggestions and expand the conversation. PGAgreen.org will be a place to get information on some of the latest innovations and trends, as well as to share stories from the trenches.

The PGA Committee plans to provide tools and tips, from eco-factoids to use on call sheets, to profiles of green producers and their methods, vendor testimonials and links to current environmental news and notes. Eventually, the committee hopes to provide the tools for every production to be able to comprehend, measure, track and offset their environmental impacts. This will include refining carbon calculators for different types of productions, as well as creating an eco-scorecard specifically designed for producers and their colleagues to track their non-greenhouse-gas-based impacts.

“I am passionate about PGA Green's mission to make changes within our Guild,” Carter says, “and to help to make a systemic change that industry professionals can carry with them from job to job and back home as well. We want to not only provide the information, but the tools necessary to implement real change.”