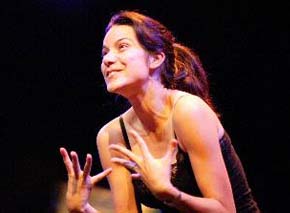 Established actress and TFT theater graduate Mina Olivera ’99 has a one-woman show underway at the Los Angeles Theater Center, “LOL! Latina on the Loose,” which follows her life from Brazil to Switzerland to El Salvador and finally to America — a show that evolved, reports the “Daily Bruin’s” Jennifer Bastien, from a playwriting class assignment at TFT.

After working as an actress in Los Angeles after graduating in 1999, frustrations with roles in the industry led her to focus on her own writing, and last year she presented her idea for a one-woman show to her good friend, fellow Theater, Film and Television alumnus Miguel Angel Caballero, the producer of "LOL!" It was after a dinner one night during which Olivera came out as one of the characters, that Caballero decided to help produce it.

"It was the funniest thing that I had ever seen. So she kind of pulled a fast one on me because she knew I was going to love it, and then I just got completely involved," Caballero said.

Barboza said he believes that it is the type of self-sufficient graduate that UCLA sends out into the world that creates such a strong community of alumni. "It's the independent spirit of UCLA that has set us out on our own journey; knowing that we have other alumni artists that are supporting each other," he said.