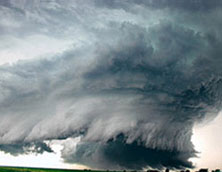 Filming the Extremes of Nature 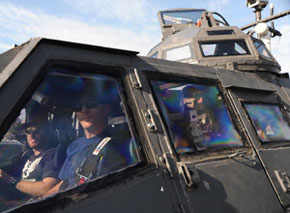 Ronan P. Nagle MFA '98, executive producer and on-screen co-star of The Discovery Channel's "Storm Chasers," and Adam Martin MFA '05, the Supervising Producer of The History Channel's "Ice Road Truckers," are working at the cutting edge of daredevil edu-tainment. The TFT filmmaking alums are risking life and limb almost on a daily basis, to get the shot, and the story, on two of reality television's biggest current hits.

Working on projects like these, the filmmakers inevitably become part of the story, because in the reality arena you can't photograph the activities of people who put themselves in mortal danger to make a living without subjecting yourself to the same hazards.

"We don't always know what the story of an episode will be until we land on it. We can’t predict when a driver is going to run into a whiteout or narrowly avoid hitting a moose." — Adam Martin, “Ice Road Truckers”

"The thrill of it for me is just the awe-inspiring power of nature. Some of these things, you can't even fathom how beautiful they are until you see them with your own eyes." — Ronan P. Nagle, “Storm Chasers”

The three main crew members of "Storm Chasers" also appear on camera as the programs continuing protagonists. In addition to executive producer and "intercept vehicle" driver Nagle, the lineup includes two of his former UCSB classmates, "champion storm chaser" Sean Casey and "navigator" Byron Turk (with legendary chasers Reed Timmer and Chris Chittick helping out). The charismatic team projects a swashbuckling panache as they climb into radar and computer-equipped, armor-plated, behemoth SUVs to stalk monster twisters across Tornado Alley — roughly a thick stripe down the center of the U.S., from Texas to North Dakota.

"There are times when visibility drops to zero," Nagle says, "and you have to wonder about the sanity of becoming a sort of human probe, injecting yourself into the center of this frenzy." At the same time, he insists, "The thrill for me is just the awe-inspiring power of nature. Some of these things, you can't even fathom how beautiful they are until you see them with your own eyes."

"Ice Road Truckers" has made outlaw folk heroes out of the practitioners of the men (and a few women) who pilot 18-wheelers across the frozen lakes and rivers, and even portions of the Arctic Ocean, of Canada's Northwest Territories. There is a practical reason for doing this, it turns out: these "ice roads" are the only way to deliver supplies to remote diamond mines and natural gas and oil fields during a brief window of opportunity afforded by the coldest months of midwinter.

Both programs have been smashingly successful. This year's third season premiere of "Ice Road Truckers" in May was the most-watched single episode in the history of the cable channel. The ratings of the third season of "Storm Chasers," which returned on October 10, are up 30% over last year's network highs.

Danger is an obvious draw for both participants and viewers. "There is definite blood lust on the part of the audience," Martin admits. "The same impulse as rubbernecking at accidents." And in his official bio on the "Storm Chasers" website Nagle says, "I love adventure and doing things only a few people will dare to do. When I tell people what we are attempting to do with the TIV [the show's hulking "Tornado Intercept Vehicle"] they assume we're crazy, but I feel it's a calculated risk worth taking."

"Storm Chasers" can argue convincingly that the technologies developed for filming rampaging cyclones safely have contributed substantially to the research efforts the show documents. The resources that a TV crew can commit to the chase have already made a major contribution to the research task of improving early warning times for people in the Alley.

The TIV is steel reinforced and bristling with recording equipment. It is now so heavy that it is essentially immovable, even in the strongest funnel. "The TIV becomes a 16,000-pound tripod," Nagle explains, "with a turret camera that can swivel 360°. During a recent chase in Eastern Wyoming we just hit right where they wanted. As a result that storm became the most studied of all time, with 110 minutes of recorded data."

A more realistic hazard is that probes and radio-controlled drones that get sucked up by the winds to take readings can be transformed into lethal projectiles. "Nothing has happened, yet, thank God," Nagle says. "But I have seen the swath cut by one of these things through a field of wheat, like a shark fin cutting through the ocean."

The sleek filmmaking skill with which both programs are crafted doubtless has a lot to do with the fact that viewers keep on returning to these programs week after week and season after season. According to a "New York Times" TV critic, "Truckers's" rapt viewers come to share "that existential recognition behind the wheel late at night that the pull of sleep and the pull of death are one and the same."

As the driver of the TIV, Nagle is one of the on-camera "stars" of "Storm Chasers," an interesting concept in the context of reality TV. Adam Martin, who supervises a production team of 30+ crew members on "Ice Road Truckers," talks openly about "casting" the drivers featured in the show with demographics in mind, and about keeping his eyes open for "characters" – "people with large personalities who don't think about the camera and don't censor themselves."

A clear case in point is the show's breakout star, Lisa Kelly, a driver Martin recruited when he began proactively looking for a different way to appeal to the show's core young male audience.

"I had some female truckers," Martin said, "but what you usually get are the Large Marge types," referring to the iconic butch trucker in the 1985 movie "Pee Wee's Big Adventure." "I kept hearing stories about Lisa and how cool she was," he says. "And when I met her, I thought, 'Well, she's pretty cute.' But she also has a fresh, vibrant attitude and an unpredictable way of saying things. Saying that a storm 'vomited all over the road,' for example. She is very genuine."

"Truckers" has four road teams, each comprising a producer and a "shooter," filming at all times, along with two roving utility units and a helicopter unit that can rush to the scene of spectacular developments – like the crash last year in which a driver walked away after rolling his vehicle and being ejected through the windshield.

In all, about 16 crew members work as shooters, their work augmented with "diary cam" footage, shot by the drivers, and often mud-spattered images from cameras mounted on the bodies of various trucks. The ratio of film shot to film used averages 350 to 1, Martin says. That's 350 hours of raw footage for every hour-long program.

Martin is frank about the need to shape all that footage into something more closely resembling a narrative. The two organizing devices they use most often, he says, are the "cliffhanger" and the "red herring." "We don't always know what the story of an episode will be until we land on it," he says. For example when a truck turns a corner and drives unexpectedly into a whiteout blizzard. Then the material leading up to that event will be culled to create either a false sense of security or of foreboding. "We’re always playing actual events that have occurred right before us. We simply want to concentrate the material to bring out the narrative."

What reality filmmakers seem to discover over time is that even when their raw material is derived from actual events, the qualities that keep viewers riveted are the ones that have been working that magic for centuries in fictional narratives: humor, strong and unconventional characters and a compelling sense of how human beings get from point A to point B – the most basic form of storytelling.