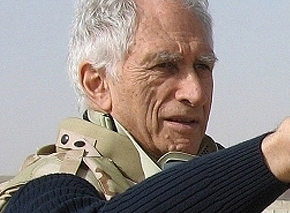 TFT alumnus Terry Sanders '54, MFA '67 is no stranger to national awards. He won his first Oscar in 1954, when the film he made at UCLA with his late brother Denis Sanders '52, MA '55, “A Time Out of War,” became the first student short to win an Academy Award.

He shared his second in 1994 as the producer of the documentary “Maya Lin: A Strong Clear Vision,” which was directed by his wife, Freida Lee Mock.

Now Sanders can add to his trophy case one of the most prestigious international kudos in the documentary field, the Award for Outstanding Achievement conferred by The International Film Festival of the Art of Cinematography, Plus CamerImage, in Lodz, Poland.

Terry Sanders (born New York, 1931) is a director, producer and writer who was granted the Academy Award® twice. [He] has directed and/or produced more than 70 award-winning dramatic features, theatrical documentaries, television specials and a large body of portrait films of major American artists, writers and musicians. He is considered to be one of the greatest contemporary documentary filmmakers. His documentary filmography includes: “Maya Lin: A Strong Clear Vision,” the Academy Award®-winning documentary about the artist famous for Vietnam Memorial Wall and the Civil Rights Fountain Memorial, “Fighting for Life,” about military doctors, nurses and medics on the front lines of the Iraq war,“Return with Honor,” which tells a story of U.S. fighter pilots shot down over North Vietnam who became POWs for up to 8 years, “The Legend of Marilyn Monroe” and “Slow Fires: On the Preservation of the Human Record.”