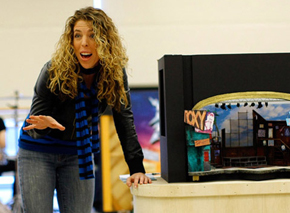 New and returning students got a jolt of energy at TFT’s Orientation 2009, along with a glimpse of their professional future that looked more like an exuberant celebration — thanks to funny and engaging special guest, theater director Kristin Hanggi ’98.

Tony-nominated for directing the ’80s “hair band” musical “Rock of Ages,” Hanggi delighted the assembled students with her message that success is best pursued by digging deeper into the activities you love already.

She chose as an example her TFT classmates Jack Black and Kyle Gass, whose penchant for “sitting around their dorm room making up funny songs” evolved into a recording, concert and film career as the internationally popular comedy rock duo “Tenacious D.”

“Rock of Ages,” Hanggi revealed, grew organically, in a collaborative workshop environment. The themes of classic late-‘80s rock hits suggested situations that could be woven together into a boisterous ensemble comedy, centered around one of the most basic of all American Musical Theater plots: The plucky lad from the country in love with a street smart girl from the city.

The REO Speedwagon hit “Can’t Fight This Feeling Anymore,” Hanggi explained, seemed to be the perfect song to be reimagined as a gay anthem.

In addition to actively developing “Rock of Ages” as a feature film, Hanggi is working on a musical movie adaptation of the popular children’s book series “Dear Dumb Diary,” a heartfelt comic chronicle of the torments of middle school.

Below is an exclusive video interview with Hanggi.