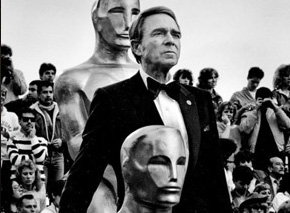 Longtime “Daily Variety” columnist and ULCA alumnus Army Archerd ’41, known to millions worldwide as the host for 47 years of the Oscar arrival pre-show, died at his home in Westwood on Tuesday, September 8, at the age of 87.

During the 2000 commencement ceremony, Archerd received the inaugural Alumni Achievement Award from the School. In 2004, many prominent individuals in the entertainment community contributed money to the School to establish a scholarship in honor of Archerd. He was known as a gracious and meticulous reporter.

Even the normally acerbic blogger Nikki Finke sang his praises, calling Archerd one of the last true gentleman journalists working in Hollywood, and one of the most accurate.”

Fittingly, the most extensive obituary was published in “Variety,” the trade publication that carried Archer’s “Just for Variety” columm from 1953 to 2005.

"Mixing one-sentence items with lengthier pieces, Archerd insisted on exclusives and provided a community bulletin board, detailing new deals, reporting from film sets and awards shows, and chronicling the births, deaths and hospitalizations of showbiz denizens."

"He was known for being fair, quoting people accurately and being generally upbeat — which, in the latter part of the 20th century, became increasingly rare for an entertainment reporter."

"'It's almost the end of an era of civilized journalism in that everything is very 'gotcha' these days. He broke the story about Rock Hudson having AIDS but he did it in a very compassionate way. He was a very honorable guy with a strong sense of right and wrong,' said producer-director [and founding TFT dean] Gil Cates."

"Even after five decades on the job, [Archerd] was a bulldog about the business, phoning the office from his cell phone to report tips and to ensure Daily Variety would get the scoop. After 50 years, he still got angry when other columnists lifted his items without attribution. After nearly 40 years of working with a manual typewriter, he had to switch to computers. While some Daily Variety veterans balked at the switch, he worked hard to master the new system, though he was regularly flummoxed by frozen computers and despaired when his work was lost."

"Archerd was proud of the fact that he never used 'leg men,' writing the column himself from his small office at Variety, using four phone lines."

"Even normally press-shy celebs like Marlon Brando spoke with him. In April 2002, to commemorate the start of his 50th year at the paper, Daily Variety printed a special salute to Archerd. In a flood of photos, the columnist seemed like the fictional 'Zelig,' appearing in shots with a who's who of Hollywood and spanning the era of Judy Garland and William Holden, Elizabeth Taylor and Richard Burton to Tom Cruise and Nicole Kidman."