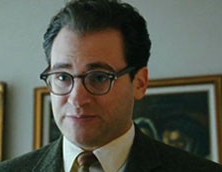 The stellar New York stage career of TFT undergraduate theater alumnus Michael Stuhlbarg reached an early peak in 2005, when he received a Tony nomination for his supporting performance in the Broadway hit “The Pillowman.”

Stuhlbarg’s many first-rate performances, both in new works and the classics, had already made him famous with Gotham theater fans. His Shakespeare Festival “Hamlet” in Central Park was legendary. But as the actor recently told TFT’s Sheila Roberts, the Tony nomination “opened some doors for me in terms of film, and I started getting some opportunities that I had never had before.”

Stuhlbarg vividly remembers his sojourn at UCLA, where he was able to work in every aspect of the art form, before zeroing in on a passion for performing. And the gratitude he expresses toward professor Michael McLain, who “kicked my ass” during the audition process for Julliard, is heartfelt.

After several years of strong supporting turns in a variety of film and TV projects (Stuhlbarg played Leonardo DiCaprio’s attorney, for example, in Ridley Scott’s recent “Body of Lies”), it was still a theater connection that led to his first leading role in a major film, working at the famed 52nd Street Project children’s theater with actress Frances McDormand, who recommended his work to her husband, Joel Coen, one half of the Oscar-winning writer/producer/director duo The Coen Brothers.

The Coens' latest painstakingly crafted and bitterly funny film, “A Serious Man,” which opens in selected markets of Friday, October 2, is also a departure for the pair: an obliquely autobiographical account of the time and place where they grew up, a mostly Jewish section of Minneapolis in the mid-1960s.

The central character, Larry Gopnik, who loves his work as a physics professor at a small college, and is at least content with most other aspects of his life, finds himself woefully beset by one grotesque misfortune after another, from a straying wife to a college tenure crisis. (The Coens admitted in an interview that the most fun they had working on the script was “thinking up new ways to torture Larry.”)

While sympathetic, Larry Gopnik is hardly a hero. He never takes action against his sea of troubles. In fact, the most vigorous response he ever comes up with is the plaintive double-edged lament, “But I didn’t do anything!”

SHEILA ROBERTS: What was it about the character of Larry Gopnik that resonated with you?

MICHAEL STUHLBARG: In some ways I imagine he resonates with everybody, in the sense of going along thinking that his life is one thing, and then getting some curve balls thrown at him. He has to go along and do the best he can. I asked Joel and Ethan a lot of questions and found my way into him, and tried to put myself into whatever situations Larry found himself in and to react and respond as truthfully as possible.

SR: What are Joel and Ethan like on set?

MS: They are very hands off and very respectful of everybody. They are very discerning in terms of trying to find the right actor for a role, but once they do that they really love to get questions from the actors. So I'd ask them a ton of questions and then they just let me do my thing. They might say, "Oh, that was great. Now here's another idea. Let's try this." It was all very collaborative and easy.

SR: How would you say your grounding in theater informs your work in film?

MS: I find that my work is pretty much the same in both mediums. It's my job to bring a character to life. It’s how that character is received that’s a little different. In a Broadway house, the person in the back of the second balcony needs to be able to receive what I'm doing. If I'm making a film or a television show I have to do much less.

MS: The quote at the very beginning of the movie, I think, has a lot of resonance: “Receive with simplicity everything that happens to you.” I mean, it's a Talmudic scholar, Rashi, whose quote it is, and I think it's a good place to start in terms of understanding what the film is exploring, and also a way to live one's life in many ways.

SR: This movie is set in 1967. What was your experience of going into that time period midway between “Mad Men” and “Taking Woodstock”?

MS: Mary Zophres, the Costume Designer, had created for everybody these amazing clothing boards, covered with pictures from the period in Minneapolis, exclusive to the community in which we were working. So when we showed up on the first day to meet her, all our work was done for us. When you put the clothes on it just made you feel like you were there. We didn't have to do anything, really.

We talked a little bit about what was going on at that time, the New Freedoms that [Larry’s femme fatale neighbor] Mrs. Samsky mentions. It's a fascinating time to find yourself in, in terms of what our country was like – the conformity or perhaps the beginning of the lack of conformity. A work-a-day professor's life veers off and changes, and what does that mean within the context of the political situation at that time? His journey kind of mirrors it a little bit.

SR: How beneficial was it to you in character as Larry and to the film as a whole that you were actually filming in a local synagogue, in the Hebrew schools, and then having a Cantor and the actual Torah there during the Bar Mitzvah scene?

MS: A really funny thing happened. When we were rehearsing the Bar Mitzvah scene and as [Larry’s son] Danny comes down from the pulpit after his Bar Mitzvah and he's got his Kiddush cup in his hand and the whole congregation breaks in with Adon Olam, that hymn we're all singing. Everybody knew it. They were actually members of the congregation. It was like all of a sudden they said, “So you guys all sing Adon Olam. Do you know it?” And the whole congregation jumped in and it was like you're back in synagogue. It was crazy. I had flashbacks to my own Bar Mitzvah.

SR: Did you have any concern while you were making the film that you might be propagating some negative stereotypes?

MS: If we’re talking about the succession of Rabbis Larry consults, I take the point of view that we're presenting these particular individuals who aren't helping Larry very much. It's Joel and Ethan who are creating them, and they had a particular experience growing up in their community. And there are truths within archetypes, too, you know. That's why they're archetypes.

SR: I have to ask, did you get to climb up on the roof yourself [in the iconic TV antenna scene pictured on the film’s poster]?

SR: And how much fun was that?

MS: It was fantastic! And I was also actually in the car when it was hit in the traffic accident scene. That was more scary than being on the roof. I was Stuntman for a Day, which was kind of fun.

SR: Did you have any training for that, before they threw you in the car?

MS: God, no. They said, "Just get in the car. We're going to do something, but you'll be fine. Keep your seatbelt on, though.”