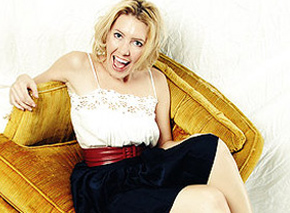 Playwriting alumna Tiffany Antone ’04, MFA ’08 was interviewed by “The Washington Post” recently about the presentation of her UCLA thesis work “Ana and the Closet” at The Kennedy Center for the Performing Arts.

The play is part of the Center’s annual “Page to Stage” festival, a three-day event, running September 5 – 7, that offers free readings and open rehearsals of plays and musicals being developed by more than 40 D.C.-area theater companies. “Ana and the Closet,” directed by Jessica Burgess, is a presentation of the Forum Theater.

"Last year’s Page-to-Stage attracted 4,500 new-play buffs, and the Kennedy Center’s Gregg Henry believes the full roster this year is reason to celebrate the health of nonprofit theater, even in these straitened times. 'It speaks to the indomitability of the theater companies in this area,' he says."

"An Iraq war widow who has remarried learns that her first husband wasn’t killed and has returned in Tiffany Antone’s 'Ana and the Closet'... The Los Angeles-based Antone wrote the play as her grad school thesis at UCLA. She says it began as a 'naturalistic, three-person play,' then went all fantastical. She conjured up the closet of the title, a malodorous void into which Ana’s just-returned first husband disappears, and into which she sends her new husband to find him. Ana and a department store clerk soon go in after them."

"Audience members picked up on Antone’s magic realism as poetic metaphors for grief, death and war at a UCLA workshop. 'For me, that situation was always real,' says Antone, but she adds, 'hearing it worked as a metaphor was wonderful, too . . . it helped me resolve the ending.' After all the surrealistic and symbolic portrayals of pain and loss in the second act, Antone says she wanted Ana to achieve a kind of healing by the end."